No Pennies - me vs. Bathroom Floor

By débora Ewing 05 May 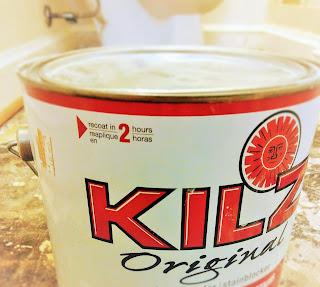 The landlords have given me explicit permission to hack at any shrub I see fit, and then they went out of town.
So I tore up the bathroom floor in my cottage.
The linoleum tile has been cracking and peeling since I moved in; also, I've noticed uncharacteristic water-collection during monsoon season (meaning not associated with the toilet.)  Since the back side of the cottage is about three feet underground, water may seeping in through the foundation somewhere.  That's something I'm not prepared to diagnose or handle.  However, it also seems the concrete floor wasn't sealed before the tile was laid; I can do that.

Being frugal, Scottish, both Sephardi and Ashkenazi, or influenced by my grandmother's depression-era conservation tactics, I went to Craigslist to look for someone getting rid of flooring.  I found a nearly-new gallon of KILZ for $10.  Bill, holder of the paint, said he worked literally down the street from my job, and we agreed to meet during lunch for a hand-off.
I entered his number in my phone as KILZ Bill.
Bill works at a secure campus called Defense-something; he agreed to meet me a block before the security gate.
"I'll be the guy at the corner holding a black bag."  He was, and mission was accomplished.  I roared up in MINI with William Elliott Whitmore's music blaring and parked in the middle of the road.  Bill put the can of paint in my hatchback, took my $10, and didn't seem terrified, so that was nice.  I actually enjoy being not-terrifying, when that happens.
I've got an 120-page manuscript to look over, so I'm taking out the trim, scrubbing the floor, taping the baseboards. By  Monday, the ms will be edited, and some time next week my bathroom floor will be shiny-white, at which point I may or may not paint something Sistine Chapel-y over it.  I'll have about a half-gallon of KILZ to sell for $5, if you have a home project. Let me know.
For the record, I found tiny, shiny, pink confetti deep under the linoleum.  Glitter truly never goes away.

I had to let the landlord in with all my true-artist-living-in-a-studio mess, so he could see how the toilet's leaking from underneath.

Me: "It was doing that before I pulled up the floor..." He gave me some brief history and said he'd probably come back in a couple days with a new wax ring.

We're cool, though, because on the way out he said he'd picked up some bulbs if I want to plant them out by the stump where I'm digging up his  yard.  Yeah, I want.

O-Ren Ishii v. The Bride - Kill Bill Vol. I
Turns out this is some good mood-setting for the editing job.  I like the idea of applying a whole Kill Bill feel to the manuscript; I wonder how the author will take this? There's some great guitar in this clip. 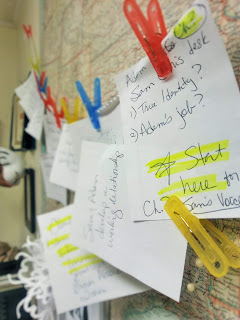