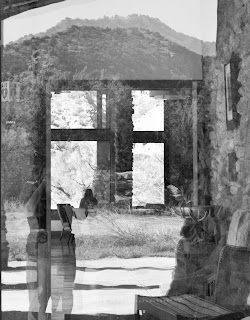 The story of Pete and Linda in Canyon,TX, has been trickling out of me for weeks now. I'm struggling with these frays, looking for a common thread that runs from beginning to end. The problem is that I can only tell my story, not theirs.  There are so many solar systems in the cosmos tha...

...there isn't enough space in this margin, but I have seen the proof.

They've always been a part of me - I call Linda my Poetry Coach because she could work magic with my words when she saw something in them. Peter is my Guru. He is thousands of years older than I am and gives away all the secrets for free. Somewhere during my travels, when I was away from the ether, they found they couldn't exist apart from each other. When Pete leans in to hear what his girl just said to him, he grabs her ass.

Texas women are matriarchal by necessity, he says. I get that. Linda's been in the role of coach, friend, sister, mother to me over the years, giving out biscuits of wisdom the way my great-grandmother used to do. My Gon-Gon was my introduction to poetry: those buttery Southern phrases had to be translated in my mind fast enough to respond appropriately. And there isn't anything more poetic than chow-chow, deep-south relish of the gods. My mom harbors irritation over Gon-Gon's claim to some sort of Texas aristocracy; aristocracy might have meant something different in those days after the war and west of the Mississippi.

I think Linda comes from Texas aristocracy, too. She is regal at her kitchen table while she tells Mazzy tall tales of living under a rock.

Over roast chicken we discussed Bill Bland's poetry while his music emanated from the neighbor room. We moved on to David Starobin's recordings - these are snippets of Pete's New England history. For a time, Pete and Linda lived in both worlds; if I am remembering, she was sequestered upstairs in New Hampshire while she worked on her book Where Angels Long to Look. She reminisced over trees she could see through the window while she wrote.

I took notes in my sketchbook during dinner conversation. Pete's given me homework: Black Mountain College, the side-stone in a Japanese garden, so many other things. Linda plays the Oracle for him, or maybe the gardener's gardener, placing the Sancho seki or the Sawatobi ishi precisely where it's needed in the conversation. I'll bet she's pretty good with a Sekimori ishi, too.

Maz and I came back the next day and toured the grounds in daylight. I met the desert willow - resilient delicate princess. Here's the locust tree, bare now, chosen by the landscaper to obscure power lines with its foliage in the spring and summer. Here's the fattest trumpet vine I've ever seen; I wonder how old it is. The stone foundation of a decrepit outbuilding is now a garden for agave and other indigenous plants. I pinched a bit of sage from the wizard's garden and put it in my medicine bag.

Pete took us into the bowels of what currently serves as Igneus Press. Like a T.A.R.D.I.S., the simple shed opened into a magical world for me. Several lifetimes are stacked one against the next, and my storyteller's mind was overwhelmed with juxtapositions. I took pictures of light and shadows while Maz typed notes on Pete's monologue into her phone.

"Kemmett used to say for twenty years he always kept a noose in the trunk of his car." Pete reached out and tugged on a rope hanging from the shed's ceiling. "Here's mine."  A poet's warning, Sekimori ishi. Maz and I were both gifted with copies of William Kemmett's Hole in the Heart along with other books from the Igneus catalog.

Pete's bear-hugs are legendary, he says. They are profound, loving, exploratory, hugs with the mind as well as the arms and heart. As we were leaving for the canyon, I requested another with a caveat:

"I need a real one - because the first two were measurements, like in measuring the depth of the soul!" Pete  chuckled and made a woo-woo motion with his hand toward Maz, but I thought his eyes acknowledged that I'd hit on something.

"I used to think I didn't want to be with a writer," he'd mused after dinner as he focused on something invisible just off the table, maybe a scene from a past life. We've all lived so many.

"Writers are terrible people," I quipped, something Dostoevsky wrote in a book I can't place.

"Now I realize I can only be with a writer; because..." and the rest of his wisdom no longer forms words for me, but remains a bolus of parental advice I've swallowed and continue to digest.

It relates to a question unasked for me, or sort of asked: what are the partner-qualifiers for my polymath soul? My daughter's father thought we could be "like John and Yoko," but it turned out he meant he'd feign the rock star and I could hold down the fort. Tim was a good match physically, mentally, emotionally, and in life experience; he was also a polymath with a set of interests different from mine. In a way, we were both writers. We settled into separate roles of artist and musician, but we didn't try to cordon them off. Fences were low and easy to jump over if needs musted.

The one I married had a good camera eye but no creative inclination; I thought mistakenly that this might be a good arrangment, giving my creativity extra space in the household. The thing missing had been respect - for my creativity and my identity as a whole human.

So maybe enlisting another writer-demon is a good idea, or at least one to not categorically avoid. This is interesting.

Robert Ketchell's Blog - Stone Setting in the Japanese Garden
After my thanksgiving dinners, I'll probably lie around bloated and apply the concepts of various stone settings to in-depth psychology and society. We are patten-extractors, right, Richard?

Black Mountain College - History
I'm sorry I never knew about this sooner, or if someone told me I'm sorry I didn't pay attention. It's time again, I think.  Let the poets take charge.

Igneus Press
Start here - feel history as you get ready for the new revolution. Sophie Kidd will be taking the reins on this family tradition. Let the poets take charge.

Sakuteiki: Visions of the Japanese Garden (Tuttle Classics)
Because I think I'm moving so I don't want to add more volume to my life, I'm buying this book later. The Sakuteiki, or "Records of Garden Making" was written originally in Japan without illustrations, I believe to preserve the oral history (I may be wrong about this.)  Have some thousand-year-old gardening wisdom.
Reactions: