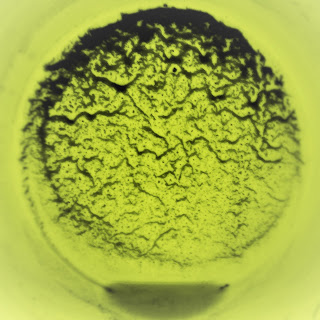 There's a place in every creative work where the characters take things into their own hands.  In Hofstadter-terms, which mode is this? M, I, or U?  I came to that spot in the current corvid-drawing and stopped, because I feared losing the original message.  I left the piece overnight and came back to it in the morning.  I found a series of intervals in the coffee-ground symbol that is integral to the message.  I scratched it in roughly and now I'm doing other things whilst my brain finishes precisely calculating those intervals in a language my muscles can execute.  The intervals measured are simultaneously several things:
I have to be able to define every one of those aspects to accurately draw out (meaning to extract) the message. Like Ramanujan, I have a distinct feeling that I'm not creating but finding something that already exists; receiving a message, translating for others who don't see the fine grains I do.

As I wrote this out I realised the mistake I avoided by putting down the work last night:  I'd been making light and dark decisions by rote, relying on muscle-memory.  A "pretty" picture would have resulted, but one lacking the message, and perhaps that difference matters only to me.

I think there's some universality to be found, though; people with no background in math nor in art will know the right one when they see it.  It's spectacular to witness that light as it dawns on someone.

I have a closing random thought, thanks to a talk given by Dr. Brian Keating at the 2,410th meeting of PSW:  the very word universality means something different to me now.  Dr. Keating is on the cusp on proving that the multiverse exists. I love that so much.

Further Reading:
The Creativity Code - Marcus du Sautoy
Srinivas Ramanujan - an article on the man
The Man Who Knew Infinity - a trailer for the movie you should watch to get an overall feel for the man and also this blog post.
Gödel, Escher, Bach: An Eternal Golden Braid by Douglas R. Hofstadter Please visit one of the crucial pivot-points of my life.  Thank you, Roab Corpman, for not reading the book but telling me it was recommended.
Chapter 5: The MU-Puzzle
Has the dog Buddha-nature?  MU!   -Zen Koan
Reactions: