At Ian's Place - Part V, in which Ian Has Company and There is More (possibly) Angy Lipstick 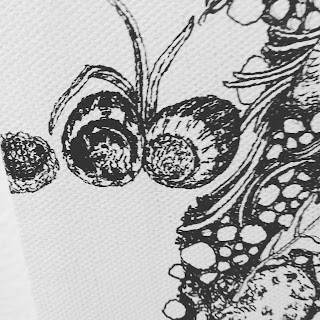 I cannot tell a lie. I mean this literally. I can fib once, but all will come out under the least scrutiny. In my eyes there was nothing suspicious about my arrangement with Ian and his place; therefore, I was completely unprepared to make my case.

“Well, I’m not living here, properly. I’m just minding the place while he travels. I come to town for my business and…”


“If there’s nobody here, then there isn’t anything to mind, is there?” Claudia ended on an overly-perky upbeat. “What is your business, Libby?” The way she said my name dropped like five pounds of bread dough to the floor. Splatted, with a thud: Libby.


“I’m an artist and writer; I have clients on the East Coast, and here…” I paused, expecting her to interrupt me again.


“No, I don’t,” I replied sheepishly. “I mostly edit other people’s books, write poetry, paint. I’m working on a novel…” I laughed off that last bit like a joke, because isn’t everyone in LA? Not Claudia, apparently.


“And you’re making…art. Here?” She looked around the room. I had some paper laid out for prelim sketches, but hadn’t actually started anything; I had no evidence to back my claim. Let me mention that her brothers were still looking like candlesticks behind her.


“Please have a seat?” I motioned between the boys and the loveseat. They, in unison, looked at Claudia. “Would you like some tea, or coffee? I think there’s tea here.” Retreating to the kitchen sounded really great. The boys didn’t move.


“Are you married?” Claudia pursed her question at me like lips. Here it was, then.


“Ah, divorced.” She pursed her lips. If they were really Jehovah's witnesses, this made me a sinner for sure, had there been any doubt.


“Ian – William – Ian isn’t ever here when I’m here, really.” I was getting angry with myself for feeling defensive, which surely read as defensive.


“So you clean the house for him?” Claudia looked over at the folded clothes on the peacock chair, where they’d been since I first set foot in the place.


“He seems to be pretty clean, so I mostly just clean up after myself.” I do. I try to leave a place better than I found it, from campsite to public restroom. I take my Girl Scout training to heart. Hence that octopus on the floor, I thought to myself. Possibly I was smiling a little.


“I see.” Claudia did not see – this was further evidence that I didn’t need to exist. I opened my mouth to mention there’d been something of a break-in lately, but surprisingly I shut it. La Prima went on: “Do you sell your art? Have I seen it anywhere?”


“Actually, there are a few pieces at La Corazón de Jesus…” I stopped talking as I saw Claudia’s entire person turn dark like a portal to places we durst not go. Her brothers went and sat on the loveseat, watching her intently. They looked like they wanted some popcorn.


“I know that place.” The voice coming from Ian’s cousin went raspy and dropped an octave. It turned into a hiss: “William would never go in there.” The brothers looked from Claudia to me, and back again, looked a little disappointed. I was failing them, or maybe they knew her head could spin 360 but wasn’t going to this time.


It was my turn to purse my lips, but I pointed them inward instead of toward the room; the mutual who’d suggested I house-sit for Ian was someone we both knew through the gallery, another musician dating one of the house artists. Oh. Oh.


“You know, there’s nothing going on with…we’re just friends, barely that. We hardly ever meet face to face…” I was definitely not building a case for myself. Claudia put the horns away and turned more condescending, like a mom who knows you didn’t do your own homework.


“Of course I know that. My cousin would never…but I’m not sure I understand why he let you in his house. You have his keys. You’ve obviously been – face to face – don’t you think?” She made a little hand gesture between two nonexistent people. “Please. We’ve taken up too much of your time already. I’m sure you have some work to do for La Cor…” – she paused and sucked in air – “don’t ever say that name in this house. Carlos? Vamanos.” Claudia saw herself out, followed by (I assume) Carlos; it must have been Joaquin who left last, turning to give me a lewd once-over on his way through the door.
“O-kay…Please come again.” I clicked the deadbolt behind them.


For several days I felt jumpy, wondering whether to expect another investigation. Test me for virginity? I’d already admitted to divorce, but who’s to say whether coital refusal was the downfall of my marriage? Hm?


I regained my surefootedness and started plotting ways to offend La Prima without disrespecting my host. My daughter says I’d never do anything to anyone, but I like to daydream. On my regular thrift-store jaunts, I amused myself with narratives around enormous, garish crosses (but is it Catholic enough?), plush velvet overstuffed chairs (but were they gay enough?) – I found a billowy indigo burqa and almost bought it to leave on a hanger in the dining room. But I never saw her again, and never heard from Ian, so he must have made contact without needing to involve me. Also, it seemed the worst transgression of all was hanging art at La Corazón de Jesus, so I worked on doing that.


I did, however, wake up one day to a basket of home-baked bread, citrus fruit, and Jehovah’s Witness literature outside Ian’s front door. I sliced up some of each and had them on the patio with my morning coffee, pressing a wedge of grapefruit between my teeth and thinking about Claudia.