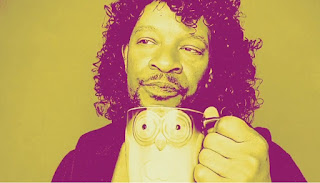 Kenajuan remembers me. This is important because I move around a lot; I worked in hotels for decades, so I've met legions of humans and made at least transient connections. It's important because I remember almost everyone I meet, but that's how I'm wired. It's surprising when others remember me, and those who do matter.
Health or aging is taking its toll, and honestly I'm not sorry I can't remember which year it was when Buck Dharma accidentally left a penny in the vending machine across from my office. I'm not sorry I can't remember the name of the guy I gave it to (you want to be a better guitar player? You have to practice - but here, take this magic Buck Dharma penny.) I do remember he said, "Who's Buck Dharma?" and I took it back.

Kenajuan and I worked hotel front desk in Kalamazoo - this was around '98. He wanted a suggestion to read for an audition, so I gave him something by Henry Miller from Tropic of Cancer:

“At night when I look at Boris' goatee lying on the pillow I get hysterical. O Tania, where now is that warm cunt of yours, those fat, heavy garters, those soft, bulging thighs?"

He loved it; I don't know if he got the part he was after. Another time he was auditioning for Cyrano de Bergerac.  Ken was thinking he'd make his nose REALLY WIDE, like all the way across his face. I loved how he intended to completely own the role. He owned the fuck out of Aaron in Titus Andronicus - our whole front desk showed up to see it. God, he was glorious in that fedora...

he bellowed, strolling onstage. After the show, he and Jason debated whether it was more of a Samuel L. Jackson homage or Lawrence Fishburne - Sam'l, definitely. Actually, it was entirely Kenajuan Bentley. Aside: I really wish that play were produced more often.
We once held a 'front desk meeting' at his place so we could drink and smoke. Ken and Jason did a stint for Sienna Models; neither Ken nor I know where Jason went.
Ken left us for Connecticut. I moved to Cali - not for career but family. Now he's in Lo-Cal and I'm in the Mid-Atlantic Region. I think we were both in Seattle for a minute, but not at the same time. Kenajuan is working in Art Therapy while we all wait to see how the industry's gonna come out of C-19 status. I'm still in hotel, from a cubicle with a chair instead of standing at the desk, also waiting to see.
It's interesting what and who remains on the periphery, caught by gravity, or maybe it's like Pete said:  we are constellations, connected invisibly to make a bigger picture.
You see? all it takes is doing something different for a minute. It was 1992.

You may have seen him in Trial By Fire on Grimm Season 4, or as the DJ in Where the Water Runs. Connect with Kenajuan on Instagram as @Kenajuan, or on Facebook.
Here's a Hot Minute with Kenajuan Bentley on YouTube.