The Mechanic - A fable in six parts - Part One 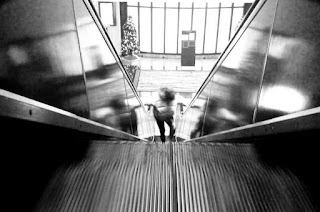 In days long gone, which also could be called days of future yet unseen, a certain robot drone went missing from a local factory. News articles ran briefly on page four; people in coffeeshops and pubs speculated on who could have pulled off such a masterful theft, leaving no shred of evidence. These learned people agreed it must have been an inside job.

The bot in question had a short file of maintenance issues: it was prone to falling out of sync, and sometimes Quality Assurance inspections found it to be missing some redundant part. Tech mechanics would either find a replacement for the lost hardware, or fashion one, or sometimes put the bot back together without the missing piece. Quality Assurance placed the mechanics on probation and ordered remedial training (if they were caught.)

Eventually the missing drone's space in the work chain was filled with a newer model drone and an insurance claim was filed for the missing equipment. Page four went back to reporting power outages and meat-processing worker strikes. Quality Assurance's end-of-year report noted that overall maintenance issues had gone up 1.0027% after the incident (privately, they agreed the drone was probably stolen, but didn't want to put that in the report.)

The Mechanic uttered sounds of disgruntlement--they weren't words--he'd found yet another pebble between his joints, but he couldn't find the special tool he'd made to pry them out. Of all the technological wonders in the past thousand years, roads were still made of asphalt, macadam, or (as one strayed further from the city) gravel. The Mechanic shook his head in wonderment.

Finally, the tiny stone popped free. With another grunt, the Mechanic picked up the axe sitting by the door, and went out to cut wood. The rigor of wielding that heavy blade was soothing, an extension of his choice to make such a drastic life change. Later, he'd take another walk through the woods.

He'd once been a team player, taking great pride in the overall .00024% loss ratio of his division at the factory. Though the team was never invited to the managers' meetings where awards were given out, everyone within earshot knew it was their hard work that won the prize. As the human workers went out the door, the drones would congratulate each other silently. The Mechanic had noticed before he was a mechanic that a higher loss ratio, resulting in another team's win of the Productivity Award, was influenced by the slow rate at which human mechanics assisted glitching team members. It was then he started learning the trade.

One day he did something improbable: he dropped a piece of motor on his foot and pushed the maintenance call button. Quality Assurance arrived first, as usual, to determine whether stopping the work chain was warranted - it was not. Just before shift end, mechanics came and took him to the Shop.

Read the next installment here.