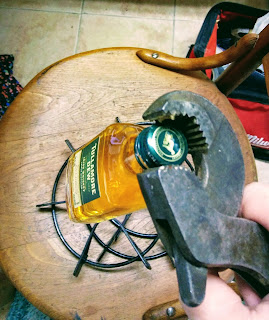 One path to a clear mind is a clear work-space. Clutter is representative of many things:  you are too busy, you are too receptive, you are hiding from something. Building a fort. I'm no hoarder, but I do tend toward hanging on to things that may prove useful later, in the belief that I won't have to waste resources going out to buy a whatever once I figure out what I need. I think my Scots-Irish Ewing genes have handed down this pragmatism which some might slander as cheapness. The Ewing Way isn't always clear, because there's a great deal of calculating to be done.

This is all to say that de-cluttering is a lengthy process for me because I have to analyse each thing...not hoarded, but collected. Saved. Okay, that sounds like hoarding. I can see my walls and floors, though, and I've only one box that isn't unpacked. I don't qualify for the TV show.

My landlord's daughters have all lived in my tiny cottage at some point, and they have boxes stored in the attic.  Over the week we've been coordinating by email so they can come collect their things while I'm home. I'm sure they're fine, but I don't know them, so I want to be here. And I want to present decency when they arrive, so they can see I am taking care of the place where they used to live. Why this matters to me is a separate post some time, or maybe it doesn't need to be explained.

So I'm multi-tasking: editing, listening to Lost Dog Street Band and contemplating turnips, cleaning house - giving in to my MacBeth Syndrome, reveling in the smell of bleach. We get the good news that hard work has paid off, and it seems time to celebrate.  If I empty a couple of these bottles of Irish Whisky, then I'm cleaning house, right? Decluttering. Also learning to compare Irish Whisky to Scotch (and I am pretty sure I fall on the side of the latter but there is more study to be done.)

Maybe because my fingers are wrinkled from soapy bleach-water, I can't open the tiny bottle in my Tiny Cottage.  Luckily, I went through a phase where I collected wrenches. The most beautiful antique wrenches have gone missing and I blame the Pakistani (not by default, but because I think he did something with them.)