Showing posts from January, 2021
Show all

Their Last Recovery - A Fable 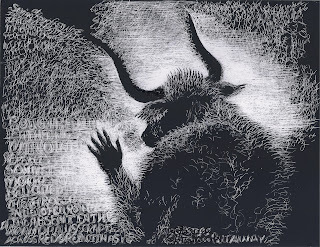 Marine anthropologist Dr. David Posey hefted himself from Mediterranean waters onto the deck of the Labyrinth  while his wife Patsy maneuvered the salvage net. “What on earth? So heavy…not just another urn…” Patsy mused. David was bursting with excitement as he untangled his find from the netting. “I think it’s gonna be a doozy, Pats,” he said. “Those aren't broken handles – more like horns. It doesn’t feel like marble, quite. We might just finally get out of the recovery business!” He scraped away a few barnacles and found an eye underneath. It blinked.  The Poseys took the minotaur home and set it up in their spare bedroom. They sold the Labyrinth and retired to take care of their last recovery. Fans of the classics, they called him Minos. When Minos was small, they visited the library and museums as a family, but the zoo seemed inappropriate. As he grew, he drew more attention; soon they avoided going into buildings and spent time on walks among the Botanic Garden's hedges.
1 comment
Keep Going »
More posts