Showing posts from March, 2020
Show all

At Ian's Place - Part XI, or the Tale of the Fish 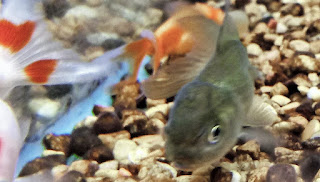 The next time I was in LA, I deviated from the usual thrift stores to one next to a pet shop, and then I went into the pet shop. I’d never consider bringing an animal back to Ian’s place but I thought it would be fun to look, like a wee urban zoo. And it was fun, quaint even, until I found the Blue Damn Oranda. In a different life, I tried to breed guppies for color. My mom was tolerant when I explained we needed two tanks to separate the males and females, but refused to let me have a third “hospital tank” for the babies to mature, uneaten, until they could be sexed. She bought bigger fish that ate guppies.  In a different different life, I was given a 55-gallon hexagonal fish tank which housed only a clown loach and a plecostomus. I bought colorful cichlids, and quickly learned that the Africans and South Americans cannot live together peacefully. So I bought another large tank, and then - yes - a hospital tank, which became home to seven Oranda goldfish, five blue and t
2 comments
Keep Going »

At Ian's Place, Part X - in Which Tricks Are Played 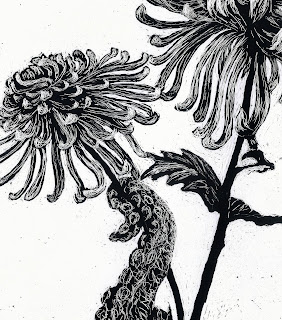 Back out East again, I was still looking for new venues to show my art. Funny how Cali is the land of Disney, but over here everyone’s into sweetness and light. Bad Warhol impressions. And flowers. Every time I leave a gallery with another business card in my case, I mentally map out some sort of bloom with some sort of tentacles hidden within it. Maybe I could paint pastoral landscapes with decomposing animal carcasses strategically placed so almost nobody notices.   I got a text from Ian, who should have been in Canada: “Hey, I cut myself on this thing in the kitchen with all the blades. Jack wants to know if you have a lawyer?” Shit. I’d forgotten to get rid of the mandoline. The guy makes money on operational digits. You don’t leave sharp objects lying around musicians. Shit. I didn’t have a lawyer. Ian’s phone went to voicemail. I hung up without leaving a message. He called back at 5 AM my time. “Hey, sorry, I guess that was a crappy joke. You okay?” It’s t
1 comment
Keep Going »

At Ian's Place, Part IX - in which I Do Two Risky Things 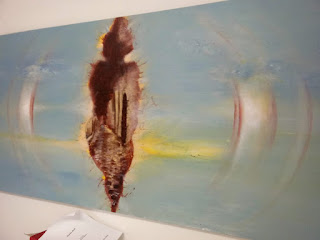 So, business as usual, except now there was a cephalopod in my brain that kept crawling out, extending its tentacles toward that afternoon on the floor with Ian. My creative center couldn’t stop from spinning narratives. I actually wondered where Ian was, what he was doing. It was important before – and I didn’t realize until I lost it – that we weren’t connected except by occasionally occupying space between these walls, never at the same time. He was still a CD I played or someone I saw on TV sometimes. An office assistant who calls once in a while to see if I need to make a follow-up appointment. I knew he was a real person; I know I am. We’re just not supposed to touch - but we did, eclipse of sun and moon. Worse - galaxies fell into each other. And somehow that made all the tangible things around me surreal. He sends random weird text messages like: The thing that always bugged me about the Tamarians was, how do you develop the science necessary for space travel with a l
1 comment
Keep Going » 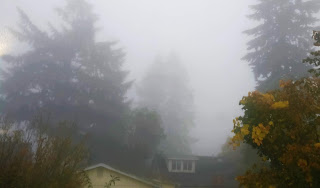 There was once a little woman who lived a very ordinary life in a small town at the foot of the mountains. She worked in the grocery store from 10AM until 2PM every Tuesday and Thursday, offering samples of food to shoppers. When her shift was over, she’d hobble through the store with her basket in one hand and her cane in the other, choosing the best vegetables and occasionally a small cut of meat. She always made sure to catch the bus home before rush hour. Mondays and Wednesdays she worked cleaning house or minding children after school until their parents got home. On those days, the parents would drive her home or call her a ride. In any case she was never a mile or two from her cottage next to the old forest - next to it, but not quite in it. When she was younger, she used to keep a garden of flowers and edibles, but the ground had gotten as tired as she was, and so she worked at the grocer’s for the convenience of good produce. She had no pets, but often chickens or a c
1 comment
Keep Going » 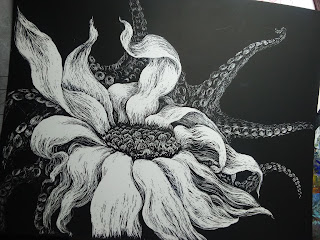 I returned from the market one day and found Ian had come home – he was on hands and knees, carpet pushed aside, examining the octopus I’d painted on his floor a few months ago. I set my paper bag of groceries next to the door and let the latch click audibly. I hate people sneaking up on me, so I didn’t want to be that guy. “Hey,” he muttered without looking up. I got down on the floor beside him. He was running his fingers over the octopode’s eye, feeling the texture of brush strokes. “When did you do this?” “Well, the eye was problematic…I did it over a few times, but most recently a couple weeks ago. How do you know it was me?” He looked up at me with a mom-expression, then softened. “Why?” His eyes asked the question, too. “I don’t know…quirky artist mood? I didn’t think I’d be around when you found it. How did you find it?” “Tripped on the carpet. I’m fucking tired, man.” We were both still on hands and knees; he leaned forward just slightly and kissed me on the ch
3 comments
Keep Going »
More posts