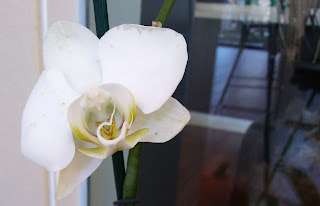 As a part of my ongoing effort to Get Over Myself, I'm sharing with you  here my process and notes for writing a poem titled Gloria.

Gloria was my father's second wife, my brother Michael's mom.  She was truly one-of-a-kind.  It's whispered in the hallways that my gay Uncle Thom was so impressed by Gloria that he gave her orchids he'd grown himself - twice.

"I'm part Indian," she once told me, blue eyes twinkling. And then she lifted her pants leg. "See my Black Foot?"  I think she was serious about being part Blackfoot, though; she had a funny sense of humour.  We sometimes fought.  She borrowed my hippie clothes when she was pregnant.  And she could outdrink my dad.  Gloria went on to marry several times after divorcing my father.

"Seventh time's a charm," she quipped.  I could hear her eyes twinkle over the phone.  That was probably the last time I talked to her.  We weren't close, but she was important.

But these aren't the stories you tell when a beloved passes away.  And I wanted to show how she'd impacted my life.  I wanted a tribute.

I started out with words that represented Gloria to me. And then I searched for synonyms that were cooler, and then I tried to find those words as applied to orchids. These are my research notes, found in random sources and typed into a list:


hard-won   unyielding   exacting  necessitous  factious
THE beauty, complexity and incredible diversity of orchid flowers are unrivalled in the plant world.In fact, some are almost impossible to keep alive, much less bring into bloom
Most of the time, the first blooming of your orchid plant will not show it's (sic) true potential.
Orchids may be one of the most feared houseplants in the arsenal
Orchids are extremely beautiful as well as exotic species.
. Orchid roots must be able to breathe in their containers,
Also, strong sunlight isn’t great to your orchids and can cause the plant leaves to burn.
orchids are also susceptible to their own host of problems Fungal infections usually suggest that your orchid plant is already in a damaged condition probably due to lower temperatures or injury.
Orchids for the most part are not heavy feeders. They will however try to absorb as many nutrients as are provided
Orchids should be "tight" in their pots for best results
Some orchids require a specific rest period,

These concepts fit well - Gloria burned hot.  She taught me self-discipline, the little I know of it, so I used the format of Haiku. I'm sorry I didn't use the word 'factious' in the poem, but I didn't.  Here is the final result.

An orchid may be
one of the most feared houseplants
and the most desired.

They need little food
but will absorb all they can
and smother themselves.

Don't expect orchids
to bloom in the first season,
nor in the second.