The Battle of the Laundromat 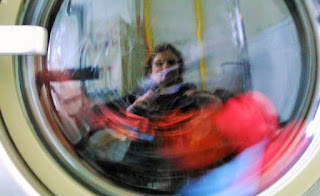 @RageMichelle and I were talking about writing funny. I thought about how my daughter's friends think I'm hilarious and always ask for stories, but there isn't much humor on this blog. I'm gonna try it - here ya go.

@lia likes to tell people I got drunk and broke the laundry machine, but that's not how it went. I was staying with her in Michigan while she had knee surgery. Maybe it wasn't that visit - I think she left me unattended to go to her job. All I know is I got bored. I would be HELPFUL. I would do the laundry.

At my place in DC, we didn't have machines so I used the laundromat down the block. Across the street from the laundromat was Room 11, an excellent Foodie joint with talented mixologists (hi, Shaun.) I wisely developed a routine:  put my clothes in the washer, set an alarm on my phone to signal the end of the wash cycle, cross the street and order a drink. Before the alarm went off  I'd order food, which would be ready by the time I came back from moving the clothes to the dryer. I was married then, and the husband was outraged when he found out laundry was costing me about $50 a week. Good ol' days.

So for whatever reason I was at @lia's house and needed to do laundry. The laundry room was in the building, but the bar was a good few blocks away. So I went there and had two cocktails before tackling the dirty pile. I can't remember if there was booze at the house, but I think not. Maybe just terrible booze. The part I remember with clarity was that I put the clothes in the machine, and then put the coins in the machine, and nothing happened. I called my daughter to complain, and she laughed, the ungrateful child.

While I was climbing behind the machine to unplug it and plug it back in, I found the "Out of Order" sign which should have been across the slots where we put our coins. I was very dissatisfied. I'd only enough quarters to complete the laundry project, and I wanted my quarters back. The bolt that held the plate over the coin receptacle looked like it would open with a screwdriver. I hied me back to my daughter's apartment - she had a tool box but not one screwdriver.

You know what comes next:  butter knife.

I went back to the laundry room and tried to unscrew the plate that guarded my quarters. I was only partly successful. The butter knife was effective in loosening the screw, but the screw wouldn't come out entirely. I thought maybe I could pry the plate a little and spin it - maybe I could reach in and reclaim my coins if the gap were wide enough.

And that's how the plate got bent.

To be fair, I really think it had been bent before - because a hand won't fit in that gap, and once the plate is a little bit bent you may as well keep pushing, right? My four quarters were the only ones in the bin, and I took them. I put them in the dryer on the left, set my phone alarm, and called my daughter on the way back to the bar. I explained that I'd bent the plate back into place as much as it would go, and you almost couldn't tell, and she should own screwdrivers, because what if you need something other than a flathead? A butter knife will not suffice.

"MOM. Did anybody see you?"
"I'm old enough to drink."
"I don't mean at the bar. How broken is it?"
"I'm sure it's been broken before."
"MOM. Jeez. The kids aren't even home and still things get wrecked."

She met me at the bar after her shift and we walked home in time to fold the laundry. Pretty sure we didn't, though. There's no way alcohol factored into any of those decisions - I would do it all again. I'm a take-charge kind of person like that.

These days I keep the tradition alive by chilling at the pool hall while my clothes spin about a quarter mile away because John won't install laundry machines back by the dartboards. He says he's thinking about it.

This was fun, even if only my family laughs. Thanks, Michelle!