About the time I had my booth set up and I could relax, I realized where I was.

One Liberty Place is that tall, pointy building you see in the movies when they show Philadelphia's skyline. We were in there, on the Observation Deck, setting up spooky art.

I don't think my art is spooky, quite, but it isn't Disney. I like to call it Creepy Folk. Crows that aren't scared, banjo optional, like that. So I thought this event hosted by Jerks Productions might connect me with my people. I made no sales, but I definitely found my people.

I met the Bone Lady - Rocky Digati of Darker Arts Studio, home of Osso Bella Human Bone Jewelry. If you're in the market for a human  radius bone necromancer wand, she's your gal. Rocky gets her bits from discarded scientific specimens. She does own an historic cemetery; she says, "we keep the businesses separate." She's a no-nonsense friendly soul. 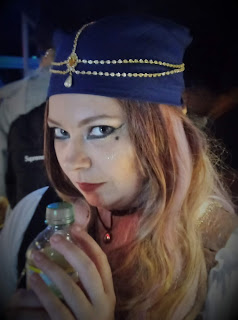 After setting  up, calming down, realising where I was, I thought I should get into costume. Instructions were cocktail or Halloween attire, so I went with both: my long black formal and an amazing blingy skeleton necklace I got from Maz for my birthday, with my cowboy boots. I forgot the crow masque at home, but remembered clown-white makeup and brutally dark eyeshadow. While I was getting ready, a witch came into the ladies' to adjust her purple wig.

"Nice to meet you...I'm awkward," she said.  We joke about introducing ourselves like this, but it works! I still don't know your name, Ms. Awkward, but that was a fantastic wig and I really liked your resin characters.  It was hard to not buy the little batwing guy; you have no idea. I fought myself every inch of that floor to not buy everything.

Later, I met a gypsy in the bathroom. I left before she was done getting it together;  when I saw her again she was fabulous. We talked about the value of InstaGram for networking.  Come find me and Miss Alyss.

I had great neighbors around my booth: Liz Palo Art and Tatiana Wingate of Sprinkled Sweetness. Liz's display was focused on skull-related art, but she has a wide variety of surrealism. Check out her website here: Liz Palo Art

Tatiana Wingate truly inspires me. We talked about (thanks to my rambling brain and anxiety) too many things, but I was so glad to meet a person who saw her path and took it. Reach out to Tatiana here on Facebook for custom baked goods - that's a rice krispie treat right there. She can ship some items, like custom rice krispie treats and bacon caramel corn. Please get to know her excellent culinary skills and help pay those dang student loans! Her cinnamon bun cookies were everything I dreamed they'd be. 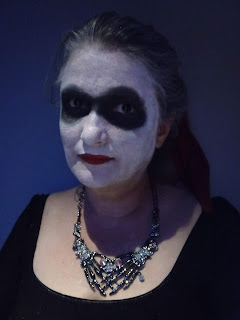 I dropped my junk at the hotel and went down the street looking for fried chicken. After a day of vending-machine food and Halloween candy (I'd resorted to beer for protein during the event) I was a little delirious. I kept forgetting I was still in makeup.

I found myself on the sidewalk surrounded by a gaggle of young Philly girls; one wanted her picture with me, then they all did, and then they instructed me: "Do this, okay?"

Flip off the camera. It was like they knew me.

"You are my people!" I declared, middle fingers extended.  I wish I had a copy of that picture.

As the gaggle flocked off, I discovered Butcher's Smokehouse and there it was - the fried chicken of my fantasies.  I was really delirious by this time and it all smelled so good...the  young man was helpful and recommended greens as a side. He made himself a plate of greens and Texas brisket.

I melted into a seat where I could plug in my phone and just gelled for twenty minutes. He was right about the greens. Two young girls came through, barely-dressed as my mom would say, one still in boxing gloves and a pink robe. As they left, I saw she had a black eye and an inner glow of real pleasure. I wish that pleasure for all of us, maybe no black eyes unless we wanted them.

Back at the hotel I got into a discussion about the staff's pumpkin-carving contest on display. Guests were encouraged to vote on their favorite of four elaborate pumpkins.

"Are they by department?" I asked. Yes, they were. I put my 25 years of hotel business to task and named each of the four pumpkins correctly: Engineering, Front Desk, Kitchen, Housekeeping. I voted for the front desk's golden Aladdin pumpkin with a blue genie in a cloud rising from the spout. I went upstairs, too tired to take a bath but did it anyway because I could. That's when the Post-Event Depression started creeping in.

I should have known all along that Post-Event Depression is real; I'm sure I worked through it with Tim after gigs, but back then we mitigated with piles of pot and alcohol. Give yourself a day and start looking for the next event - that's all there is to do about it.


"I work on four novels at a time." - Thierry Sagnier

In the morning, I was still weepy, but glad to go home. A young porter joined me on the elevator.

"I am," I said, trying to not burst into tears publicly.

"NO! Why you leaving me?!" He sang this. And he kept singing.

And I cried and laughed, and all this went on until we hit the lobby. I explained that I wanted to walk to 30th Street Station and catch my train (or at least try to walk it with all my baggage) and he gave me instructions which led me to Arch Street. This is where a dread-locked busker was playing Star Wars' theme song on flute. Of course I gave him money. 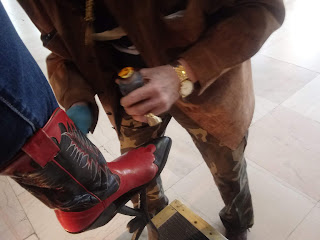 Yes, I bailed and took a cab from Chinatown-under-a-bridge. I don't think that's what the locals call it, but they'll know exactly where I mean. And at the train station, I got my cowboy boots polished.

Shoe-shine guy was possibly the most amazing, and maybe the most Philly, person I've ever met. I could only understand 1 out of every 20 words he said because he mumbled in a heavy accent and I can't hear on a good day, but I got the gist. He was closed until dinner shift, he said, but I had to catch a train. He opened up his booth again for me. He was enamoured with my boots, and I with his bling. If I lived nearby I'd probably drop in with a sandwich once in a while until I discovered the secret of his enigma. 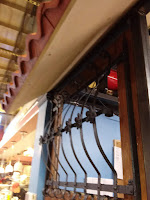 I didn't have a cheese-steak, but I did have Puerto Rican paella from the Reading Terminal Market, and I think that's just as Philly if not more so. I talked with a cabbie who'd lived there all his life and who'd made his career choice the night he spent 2.5 hours with a white businessman, a black drug dealer, and a black transvestite in his cab.
"Best night ever," he laughed. That night would have convinced me, too.

I cried again when I realized car 23508 would be going on to New Orleans when I de-trained in Alexandria. I wanted to just stay on the train. But I came home and didn't unpack, because it's my birthday and I can do what I want. Yes, like every other day...

Please make this a fabulous day for yourself.