At Ian's Place, Part II - in which there is Angry Lipstick 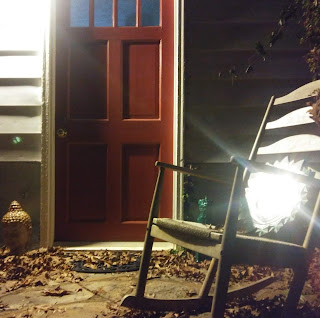 Bi-coastal stuff makes me a little crazy sometimes. The lifestyle suits me, but I do occasionally wake up not remembering where I am, like that time I woke up to a voice message from Ian:


"I don't need you to be here if you can't treat my place with respect. Just leave the keys inside next time you're out here. This arrangement is terminated."

It took me a minute to realise I was at home, my home, East Coast, and even so I had no idea what he was talking about. Preparing to email him with just that message and a promise to leave the keys - I never stay where I'm not welcome - I found he'd also emailed, with a bit more detail:

"There are cigarette burns on the arm of the loveseat. It's not worth having it repaired, but frankly I'm disappointed."

I wondered how disappointed he'd be when he found the octopus under the rug. A parting gift of artwork. Maybe the octopus had been smoking. Okay, I was salty. I took my time and crafted a polite response:

"Thank you for bringing this to my attention. I assure you I have no idea where any burns could have come from, and the loveseat (and everything else) was in perfect order when I left. As directed, I'll leave the keys on your counter next time I'm out. I can mail them to you. Please let me know if that's an option."

...but the more I thought about it, the more pissed off I became. I don't smoke; I've never seen Phil smoke, and I've never seen anyone else there. I'd locked the door when I left, like always. I'm very much not good with loose ends, and I wanted to know what happened, how it could have happened. I sent off another email.

"Good afternoon, Ian; I'm really perplexed by this. Could it be a break-in situation? I don't smoke and I've never even lit incense at your place. Not to belabor the point, and I will return your keys, but would you mind sending a picture of the damage so I can see it? This is beyond weird, I promise."

The response was a picture of the loveseat arm, clearly burned in two places, very much looking cigarette-sized. No words; not in the email, nothing in my mind.

I went from being pissed off to being disappointed - how terrible for Ian to have someone surreptitiously damage his belongings. From disappointed to violated - this transgression violated me, too. That little Cali-cape-cod had been my residence for many months, and someone had invaded. From violated to pissed off - whom can I shank? But I was defeated before battle began, impotent from here. I had no course of action but to return the keys. I wanted to mail them and be done with it, but what if someone was creeping him? Would they check the mail, too?

And then I brought the thing around to me: I, too, had violated Ian's trust. I'd plastered graffiti across his worn wood floor and then covered it up, like a punk. Here I thought I was doing the adult thing - promoting myself, budgeting, collaborating with another professional to utilise empty space. Why was I always like this, not calculating all the way across the equals-sign? I could feel that octopode's eye, 3000 miles away and through the carpet. J'accuse.

I'd need a different place to stay next time I was on the West Coast. Maybe I'd have to stop living this way - that thought unnerved me. Now I felt shunned, no longer allowed at the cool kids' table. We can't have that, I told myself. I might choose to give up bi-coastal life, but that edict wasn't going to be foisted on me. Still, I felt a sickness in the pit of my stomach: somebody had been there. It was clear as two burns in leather.

I went ahead with business as normal; met some clients, looked for Lo-Cal House Sitter Wanted adverts, worked on paintings that I'd not finished for a few years now. I actually turned up the ringer on my phone in case someone responded to one of my queries. The next call came from Ian.

“Hey, Libby.” There was enough space between Hey and Libby to fit another word. All I could muster was the same.


“Hey, Ian.” They say people can hear you smiling over the phone, and I think it’s true. I wondered if he could hear me biting my lip.


“I need to offer you an apology. I’m really sorry; I found out…would you believe I have a crazy ex?”


“Yeah, don’t we all?” I think we both laughed nervously. Mine is certified.


“I ran into her sister. Thought we were seeing each other again. I guess she’s got a key. I found cigarette butts out on the patio, too. Looks like she’d just been hanging out waiting for me to show up.”


I pictured her, long dirty blonde hair, angry lipstick, feet propped up on that table and leaning the ladder-back chair until it hit the house…I hate cig smokers who don’t even clean up after themselves. That was crime enough to break up with her in my book. I wondered briefly how messy that breakup had been, or if he’d just ghosted. Maybe she got tired of waiting for him to show up.


“So, I do need you to stay here if you’re coming back out this way. Is that okay?” He said need. I’m a sucker for being needed, every time. I had to think carefully.


“Yeah, that’s fine,” I caved, of course. The relief was palpable – I felt my blood pressure go down. “I’m not sure yet when I’m headed back…”


“I need to get you new keys; I’m changing the locks…man, I’m really sorry. I just blew up.”


“No, it’s fine,” I told him. “I would have, too.” Because it was, and I would have. Two days later I received a Priority Mail envelope with the new house keys in it.

I'd be seeing my octopus-friend again.
To be continued...
Reactions: