REDUX: Happy Fourth of July, No Matter What The Founding Fathers Intended.

By débora Ewing 03 July
The first English Expedition to explore Roanoke Island in 1584 was a fact-finding mission bent on gaining land as a means of wealth and strategic advantage for the British Crown.

A second expedition came in 1585 as a military and scientific mission, far from peaceful. The existing citizens of The New Land were disrespected and blood was spilled.

In July of 1587, a third expedition to the island came with women and children, intending to control property by permanently settling British colonial families. Not  only did the attempt fail, but the settlers disappeared completely, possibly integrating with natives in order to survive. The only clue was the mysterious word 'CROATOAN' carved into a tree.

Expeditions sent by France, the Netherlands, Spain, and Portugal carried out similar missions. Their narratives have not been blended into our historical tradition, nor have the written and oral records of Native Americans been included.

In 1620, Plymouth was settled by religious Dissenters who fled England's hostile political environment (note the juxtaposition of religious and political.)

Our Pilgrims thought the Church of England "too Catholic" in practice, so they emigrated to The Netherlands, where they could live by their own carefully-chosen tenets. This part of the story you've heard before. The Pilgrims apparently couldn't get along with the peaceniks of Holland and somehow managed to still feel threatened.

So they came to The New World:  to provide order and stability to the wilderness, squeeze in among the slaveholders, and disregard the native culture as they saw fit. They hired two ships and ultimately crossed the ocean in The Mayflower because the other ship - the Speedwell - twice developed mysterious leaks and stayed home.

While the Mayflower was at anchor in Plymouth Harbor, the first group who went ashore did so with the intent of stealing the natives' winter food supply. They were successful.

The quest for religious freedom has been a pillar of American tradition, but never think for a minute that the quest for wealth was forgotten in the New World. More British came to America, either because they had nothing to lose or because they had everything to lose. They envisioned setting up their own fiefdoms - becoming lords on new lands in defiance of the Lords who already owned England. The Puritans were disinclined to be serfs, so the new Lords bought more slaves to work their fields.

Please don't mistake their efforts for easy usurpation - this was hard work. The disenfranchised Brits - concurrently with Germans, Scots-Irish, Dutch, French, Spanish, Portuguese, and others  - took the New World and survived by any means necessary, burning down anything in their path. Writing laws and then breaking them, inch by inch.

The British Crown gleefully aided them in exchange for taxes as hefty as those imposed in England. Taxation is a great way to ensure your populace doesn't become strong enough to overpower you.

However, it was difficult to enforce taxation by boat in the 18th century. The time it took to cross the Big Pond twice was enough time for these clever immigrants to devise ways of keeping the wealth they'd accumulated - by any means necessary - in the New World.

The Crown had written rules granting its army power to invade households;  subjects were required to house, clothe, and feed the British Army. There was that famous party where angry colonials destroyed an entire shipment of tea - some dressed as Natives.

Nobody really paid attention to what the real Natives were doing, unless some commerce could be negotiated or annexed for personal benefit.

In 1776, a bunch of learned white men of British ancestry got together and decided they'd stockpiled enough resources to defy the Crown. They wrote an impassioned Declaration of Independence, put it on a boat to England, and took steps to carry it out by any means necessary.

Tomorrow is the anniversary of the publication of their decision.

This is our history - the history of ALL Americans. I've focused on the whitewashed version because that's what we were fed as children. Those who came before us came for their own reasons, sometimes not by their own will, nor under their own power. They came from Europe, but also from Africa, from Asia; some of them came from stock which was flourishing in America before Plymouth Rock, before Roanoke Island.

Like Jesus, the signatories of the Declaration of Independence intended to save their own, but ultimately set in motion the idea of Liberty and Justice for All. You might think that's a stretch, or you might think Jesus isn't real - just go pour yourself another cup of coffee, read the whole thing over again, and realise why you're sitting here.

HERE, not somewhere else. You are here due to a wide range of motivations for a variety of influential people, all bent on remaining here, in America, by any means necessary. Texas is a whole other subject.

You have permission to flourish - take it. It's your birthright, even if you're not white. Even if you weren't born here. I believe the words I was taught in school. We are all created equal, and this is the land of the free, and the home of the brave. Take it by any means necessary. 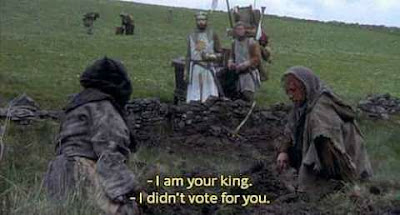