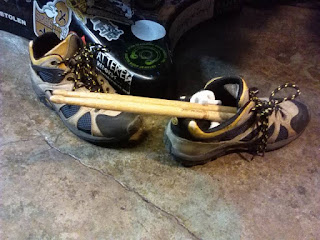 
Did you ever wonder whose feet you had on when you bought the shoes you thought fit?

It turns out she was talking literally about shoes. But that wasn't how I read it, and yeah I have, Linda. In allegorical shoes, I really have.

There was the time I moved to four different states and had three babies with a guy who told me we were like "John and Yoko" - we didn't mean to start a family, but we can rock this, yeah? Turns out he meant I would do the family part and he would do the rock part.

There was the time I went back to school, found I really enjoyed accounting, and bought a bunch of suits for my new accounting career. And then I got a hotel job in Housekeeping. I did end up working Night Audit for several years, and I enjoyed it, but I was issued a uniform. Didn't need the suits.

There was the time I was mad at my husband, who wouldn't help me shop for a car, so I went to a dealership and bought a disaster on wheels with my own efforts and credit. I sure showed him. When that car descended into ruination, the husband did help me buy my sweet baby MINI, of which I retain sole custody after the divorce.

Arrogant? Delusions of Grandeur? Maybe, or maybe not delusions if I possess at least some of the skills I need to do the thing. I can learn the skills I need, with time, or I can try to recruit a bunch of stooges to help me.

Poor choices often result from not fully calculating a project. We like to focus on the glorious cathartic ending, and gloss over the actual work it takes to build a foundation. We also tend to proceed with projects that require complicity without ensuring that the recruits actually want to be complicit.

Regrets are stupid; don't have them.  Be honest with yourself about what you could have done, or couldn't have done, differently.

I recommend trying new things, seeing yourself in trial scenarios, calculating whether an uncharacteristic choice will be good for you. Follow up on opportunities - Envoys take what's offered, Takashi. I caution against investing in the entire plot before you've even made the first move. You might be figuring out where your kids will go to college; he hasn't even answered your phone call yet.


We hold others accountable for the worlds we've built for them in our own minds, even though they've never set foot there and even though we didn't gain their permission to build them a world.  -me.

You probably know the feeling, too, when things seem to be going too well - you start waiting for the other shoe to drop because the Universe doesn't want to see you succeed. This is a learned reaction to prolonged trauma or a series of traumatic events. That's not why those things happened, though.

Sometimes you really didn't miscalculate. Sometimes it wasn't about you. Not all variables evidence themselves - you need to be ready for the unknown. Have some reasonable contingency plan in place, even if it's not the ideal.

If you're like me and have a history of going off half-cocked and screwing up everything, take heart. Don't stop yourself based on your past history of not fully calculating or including data which wasn't yours to include. Go ahead and try again, but this time weigh accurately and know your worth.

Be like Moe, who knew what she could do, tipped a house band on Bourbon Street to let her sit in, and played so well she got pats on the back from the band. The house drummer had even picked up a little energy by the time we walked out of there.

That's not a delusion of grandeur, Moe; that's accurate math.  You wear your shoes well :)

Linda A. Fields - Author
You know how you open a book in the middle somewhere and read it to see if  you'll like it? Okay, maybe that's just me. But if the writing's messy, I may be put off. That Never Happens with Linda A. Fields.  Please give yourself the opportunity to get lost in her flawless and elegant writing.

Hell or High Water Tattoo New Orleans
This is where I got my (currently) only tattoo, and the site where today's photo was taken. Thanks, guys - it was a pleasurable experience and a damned interesting place to visit! If you aren't in the market for a tat, pop in there anyway and say hey.  Also go up the street for mezcal and nachos at that place with the Jack Daniel's chandelier.