Getting Over Myself vs. Man of the House 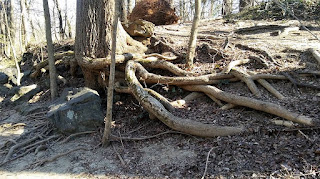 I'm in a funny place these days, mentally. Physically, maybe, since Annandale is fascinating. But mentally I'm in  uncharted territory.

I have lived a lot of lives - I count ten. I've surpassed Cat Status.  Having been divorced and living in my Tiny Cottage for just over a year now, I am feeling something new: comfortable in my own skin. Comfortable with the ramifications of whatever comes out of my mouth, because I am certain that when the  words came out I meant them. Comfortable with completely changing tack if the origin of my words no longer suits the situation. I can learn. There is nobody else but me, and I am still afloat. I am unrepentant.

I didn't do this by myself. I have the support of people who believe in me when they have no reason to believe, other than they see me from outside of me.  They see my efforts and failures, and they never question whether I am going to get back up. Sometimes I wasn't sure I'd get back up, but people whose perspectives I value carried on with conversation like this was nothing - so I let it be nothing. When I hurt, they said yeah. It hurts. And I got up.

When things are fucked for long enough, the fuckery starts to look like normal. Once I became aware of drama addiction I watched it like you'd watch a creepy neighbor, and I learned to recognise the emptiness which is lack of drama. That was the easy part. It wasn't comfortable.  I filled the emptiness with memories - things I feared, things I loved, things I coveted. Slowly, I emptied my life of those things, too.  I have been nothing. Now I am being. I feel my roots, and they are mine alone.

I'm working on being able to come and go from Nothingness at will. I'm working on saying, "Okay." I gave myself permission long ago to fail.  That is the first step. If you want to do this thing for yourself, please know: you have to fail. You have to fail several times. Failure means you tried, and eventually you'll get it right. If you have never flown a kite, try that. You'll get the idea.

The other day Moneypenny told me she had a great dream: "I dreamed I had my own place. It was so great."

I'd had a dream, too, which was different from hers; we came to the same conclusion, though. We had both decided that if nothing else in life, we would be Man of the House.

"Cuz you're a dood," she said, and we laughed and laughed. We're both guys, if you think a guy is someone who doesn't have to answer to anyone. Doesn't have to try to make others feel comfortable. Doesn't have to hang back so as not to appear bossy, or pushy, or arrogant.

If I know you, it's not because I need you. I am the Man of the House. I'm the one who says what goes on in my Tiny Cottage, and if somebody's gonna try and bring something to the table they had better bring a sandwich.
Reactions: