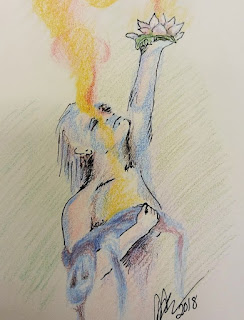 I've been practicing exposure by working in public; I'm getting the hang of it. Recently I took a booth at a restaurant so I could eat and keep working. People stopped intermittently to compliment my work, and I said, "Thank you!" And I meant it, and I didn't get all awkward, even when someone wanted to discuss further. I Advanced the Discussion. Gimme a patch for that.

Sunday morning I checked into Beanetics for a French Press and a table to work. This is where the magic happened.

The little Barista-chick who has discussed my illustrations with me before is leaving; next Saturday is her last day making our coffee. We - she, I, and the other regulars - joked about getting matching coffee bean tattoos on our wrists.

The Scottish guy doing genealogy work at the neighbor table was uninterested or polite, but a dancer named Heidi really liked my pictures. Her mom appeared later and asked whether Heidi had seen my work; yes, she had.

Heidi's mom and I had what I suspect is a conversation old ladies are especially good at, going from Item A to Question K-L-M with only a few mental leaps. She, too, had lost a family member to a brain tumor, and another to dementia. I told her about the book I'm writing in my brain while my hands are illustrating: it's for us, I said, the survivors of someone else's illness. I told her I'd never been interested in joining a Caregiver Support Group.

"Or a grieving support group," she added.  "I don't want to hear other people's problems." I get that. I so much get it. I am selfish with my pain. It's private.

I thought about my Uncle John, who tried to attend a few Veteran support groups but stopped. As a Navy man he'd been up and down the rivers in Viet Nam, but said he couldn't commiserate with these guys who were still mired in the past. So maybe it's not so much privacy but perspective? Or do privacy and perspective reinforce each other?

Heidi's mom told me she understands the value of connection.

"You have to talk to another human sometime," she laughed. So you see? That part doesn't change, the aversion vs. the need, even when you get to 81. She told me about her one confidant, someone she knew from a completely different social sphere, who became her best support when she was deciding to put her husband into hospice and later when she decide to bring him home, "because I liked him better that way." These days she connects with one or two friends who are avid quilters.

"There's an annual thing, maybe Heidi remembers the name," she mused. "The theme is always on some sort of emotion. I have a hard time coming up with something that hasn't been done so many times. Maybe you can think of something for me and I can quilt it."

The reason I never like to show people my work is that they say one of two things: "Why don't you be an artist?" or "Can you do this for me?"  It's awkward, but it wasn't awkward this time, because Heidi's mom hit on possibly my absolute favorite thing:  my work being translated by someone else. I told her I'd think about it, but I didn't have to think for very long. She had given me a gift in the conversation, and I was merely reciprocating. I gave this picture to Heidi's mom, and I asked her to email me what she came up with, if she comes up with anything.

The side-plot here was at the table between mine and Heidi's: The Scottish guy was counseling the Bolivian Barista on career path and genealogy. BB is very interested in psychology, and as the afternoon went on all of us heavily encouraged him to pursue his dream. Like Paolo Coelho says, the Universe will conspire to help you.

So Heidi's mom showed my illustration to BB, and asked for his thoughts. He studied it for several minutes, and then turned to me.

"I have only one question." I assumed he would ask what it was being cradled, but he was perplexed by the connection he saw in the aura of the woman - coming up from her soul, he said - seeming to go into the lotus. "The only thing I can come up with is there is one kind of lotus which blooms twice." Heidi's mom and I looked at each other, impressed. He continued,"So all I can think is that she is having hope, and she is giving it to the lotus so it can bloom again."

Damn straight, Barista. When you are busy caretaking, you forget to have hope because you are so focused on the day-to-day. Every survival score is measured against the patient: on a scale of one to ten, how much are you living through this? How much are  you not dying? I hadn't created the image with words - it had come out of my subconscious, like the woman's aura. So already my work had been translated into another medium. So Much Winning.

"He's better than I am," Heidi's mom nodded.

So, fuck yeah. Second Spring. This is even better than second breakfast.

The Meaning of the Lotus Flower

From Town and Country Magazine

Book of the Dead Transformation Spells

From The British Museum

Friendship vs. Dying - An Excerpt from my upcoming book

From this blog. Please remind me to keep working on the book!

We meet biweekly at Mosaic. Please come over. Don't worry about what you've missed - we've been reading the same book for over a year.  We're getting T-Shirts to reward ourselves for our enthusiasm and diligence.