Purging vs. Growing - A Story of Date Rape 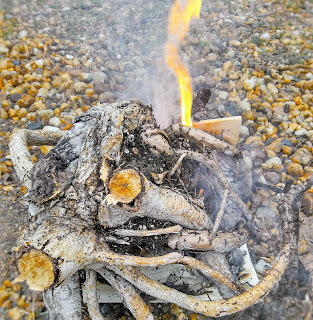 ...so you may remember my banyan tree. I grew it from seed, killed it three times, and vowed to never kill it again.

I have a simple gauge of a person's nature: tell me something you have maintained for at least ten years. My answer is this: I have a pile of unfinished projects, furniture I've shucked from state to state, and I had this tree since my second year of marriage. In a way it represented the marriage: it kept reviving itself after near-death experiences. I moved it with pride to Annandale from DC. I was excited about moving forward.

And then I got distracted and left it outside to freeze.

I developed an interesting bundle of emotions this weekend and decided to burn the stump in a sort of cleansing ceremony. I even folded the pages of a book - Urdu for Beginners - to use as firestarter. The landlords are away and I wouldn't have to explain the blaze in the driveway. And then I realised I don't care. I don't require a ceremony to absolve myself of this failure. The tree died. I'm good. I feel liberated in my realisation.

Personal growth is a constant process of shedding. We acquire things - and here I mean literal, physical things - because humans crave the tangible in order to identify the metaphysical. Almost every item we own has a connotation to another person. Some connections are very lightweight, but this doesn't diminish their significance.

We build a tangible world of things to which we've assigned meaning and then we forget we did it. The meanings continue to affect us subconsciously. There is magic in the world, and this is the gist - it's about making use of connotations to further your goals.

Don't get crazy and start eliminating everything that reminds you of whatever. Connection infers a joining of more than one. What we take away from interaction with another person tells us something about ourselves. Some of what you've collected represents you and your quest to become your best self. On the other hand, I don't recommend carefully analysing every single thing you think you might need to eject. Trust your gut a little bit. If you get rid of something and then discover it represented you authentically, replace it with a new connotation. Sometimes you get to be the center of the universe.

So I burned my banyan stump, and it caused a huge billow of smoke, but I wasn't trying to purge anything. I just like fire. Flames appeal to my Djinn ancestry.

As you know, the Universe does what it wants to do. Rain quenched my tiny fire - Aguafiestas. The universe cried tears into my Scotch Coffee while I stood watching the smoke peter out.

Apparently my soul wanted to do some divesting, because I suddenly needed to plant my potted iris out in the yard, in the rain. Leave your campsite better than you found it. Deflect. Here was some potential resolution once buried deeply, unearthed.

This is a story of Date Rape.

A person with whom I'd been intimate, who had offered me a lifetime which was a lie, asked me (as a friend) to come with him to drop off items at a property recently acquired. I found iris growing there and wanted to dig up some. Sure, he said. And then his truck wouldn't start and needed to be towed or jumped.  He made some calls, and there we waited.

While we waited, he made it evident that he wanted to collect some favors we'd once given each other willingly.

I may not always abide within society's structure, but I have rules of my own. If I give you my trust and you betray it, I take it back. My being out in the woods with this person was me trying to get over myself, trying to believe that humans are good at heart and you can still be friends with an ex. This story does not prove out the theory one way or another. I had trusted him enough to be there with him.

I said no, thank you. And we sat in the truck and waited for the tow. And this person, a friend, continued to press for favors. Had I been somewhere else I would have gotten out and walked  home. I didn't know where I was, and we'd seen no other signs of life in hours.

Did I want it? No. I said as much when the offer was extended. And when it was extended again. Ultimately I made a choice to participate, to eliminate all other possible scenarios, some of which may have been violent. I never thought this person would be violent toward me, but I had also thought his word was good and I could trust him. Clearly it wasn't, and I couldn't.

At the moment, I saw complicity as a possible guarantor of bodily safety.

This is the story nobody tells you. I'm telling you now.

The tow truck showed up some time after I betrayed myself and sacrificed my dignity; I was delivered safely home. The following day there was a phone conversation where I yelled and used the words Date and Rape.

"The same could be said about you," he told me. I had to dig for this reference, but I found it. It referred to a twisted version of life  he had tried to sell me, a version which led to our break-up. It had to do with me initiating sex in the middle of the night while we slept in the same bed, just  not sleeping together.

The comment made me think about how date rape can apply to male persons as victims, trying to ignore the erection when the brain says it doesn't want to pursue a relationship with the woman who wants sex. Does that happen? This was the inference made in his comment. Societal norms may encourage the male person to make the conquer, in case your guy buddies ask. I don't know what's true; I'm actually not a guy.

I planted the irises - they're just flowers, after all - and later I moved them to my new place. I never gave a thought to their connotation until today, but the universe is right. I will bury the roots.

Giving is selfish and often occurs as we try to unload a burden: one for which we can't forgive ourselves but that we can no longer carry. We give our burden a new home in hopes of absolution. I am leaving the irises in this yard, and they won't hurt anybody - I've calculated fully this time. They are just flowers, after all. I am leaving the words on this page.

Life is horribly complicated, yet I am happy with my progress in learning to live. My stomach churns to tell this story, but I tell it because I'm safe where I am. The banyan stump is still smouldering in the driveway. After I've left this place, people will enjoy the irises without knowing the connotations that attach them to me. I think I'll also plant the day-lilies which came from my mom's yard, for karmic balance.

Let's see what I can maintain for ten years beginning from here.
Reactions: