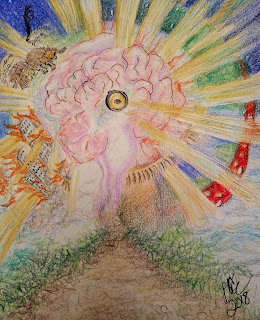 I had an epiphany on my way to work, in the form of a false memory. Bear with me here - this may get a bit convoluted.

A chain of tangentially-related but mostly insignificant memories marched through the front of my brain: saw a car that reminded me of a former coworker who drove one; couldn't remember her name but remembered a different coworker's name. Remembered the bellman who gave that coworker a nickname. Nothing important.

But then I realised I was remembering the wrong bellman. If you have worked in hotels, or stayed in them often, you know there's That Guy Bellman - the one who's been there forever and knows everyone and everything. He's a pleasant fellow and you are glad of his welcome when you arrive, whether you are a guest or employee.  The incidence of there being That Guy at every hotel is an isomorphism. The pattern is so similar that you can mentally map it from one set to the other.

In my false memory, I clearly remembered That Guy from the last hotel I worked, making the joke about the coworker from the wrong hotel.  My mind flipped the memory-face back and forth several times until I had it sorted, each version crystal-clear in my mind. Given the isomorphic qualities of hotel staff, I could understand how it happened. I had to note the implications, though, of how real the wrong memory seemed.

So the epiphany relates to a confusing memory I've had for longer than I've had it:  you know the movie Serenity? If no, I'm making mom-face at you and you need to go look. Anyway, my friend The Meg insisted I watch it, and in fact insisted I watch the entire TV series Firefly first, and her insistence really proves she is a true friend. We gotta go to the crappy town where I'm the hero.

I watched all the episodes of Firefly and then arranged to watch the movie Serenity at the Meg's house over dinner.  As the movie rolled, I freaked out with joy.  This was a movie I've been trying to find for the longest time.  Next layer of inception:

When I worked the hotel night audit shift, I stayed up all my nights off watching movies on DirecTV. I would flip channels at every commercial, so was generally watching 2 movies at once.  One particular night I was watching a sci-fi movie with a lady in a futuristic classroom wearing an awesome outfit (I later designed a similar outfit for myself.) I wanted to catch the title so I could rent it and watch beginning to end.  As I flipped channels during commercial breaks, though, I got confused: I'd swear I went back to the same channel but now there were goofy cowboys getting into a space ship. And now scientists and then a guy looking at a bunch of TV monitors.  And now cowboys.

Flash-forward to the future: I am sitting on the couch with Meg to watch Serenity, and I see the lady with the awesome outfit and I get all excited, realising that this may be the movie I wanted to see from beginning to end! And now it was found! When we got to the scene with Mr. Universe, I was all the more convinced - mystery solved.

Here's the problem, though: Serenity came out in 2005. I was working graveyard shift and staying up all night in 1998. That's a math problem, folks, and it's plagued me for the longest.

I know our brains can play tricks on us. When you remember something, you are actually recalling the last time you remembered it.  Still, how can I be recalling something that hadn't happened yet? I remembered it so clearly. Until today's very realistic yet identifiably false memory, I couldn't accept the possibility that my brain was just wrong.

Science may eventually resolve time travel, but I am having more faith that my brain mapped the movie over closely related symbols it had retained since my graveyard shift days. I had to see myself doing it to myself in real-time to understand exactly how vivid the false memory can be.

Dream interpretation works this way, too: while you're sleeping, your brain is sorting data it has collected throughout your waking day or lifetime. The subconscious will do its best to map whatever you've collected to help you make use of it when you're awake. If your dream-brain is trying to present a scenario to you, it may cast people you know in the roles it wants to portray.

It's tempting to pin a specific meaning to a dream everyone has. Stephen King's book  The Tommyknockers used the dream of teeth falling out to launch his plot, and many of us can relate. In all likelihood, though, the common thread is going to be that we humans own the same hardware: our mushy brain tissue and its operating system use the same methods to map the data that each person has collected. And many of us grit our teeth in our sleep.

Coincidences can be somewhat Copernicus vs. Pythagoras in nature: they arrive at the same conclusion but for the wrong reasons.

Keep this in mind when you try to figure out what your dream-brain is conveying to your waking self: the message may not have anything to do with the person in it, but a quality or location associated with that person. 98% of the time, dreams are processes of data you have actually come into contact with recently.

We'll just leave 2% to factor in that which science hasn't qualified yet.

The Tommyknockers - by Stephen King
This was one of my favorite King books. I don't think I saw the movie.

Carl Jung: The Concept of the Collective Unconsciousness
Check out Grandfather Jung's ideas on the concept of dream interpretation.
Reactions: