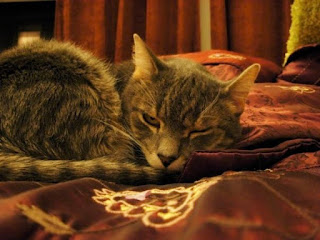 I just went through a round of re-forgiving myself for various ill-conceived decisions I made when I thought I was smart. I've reached a point in my life where all my miscalculations are auto-functioning and I no longer have to monitor them with my guilt; but the guilt doesn't go away, no.

However, I can stop following that guilt around with actions meant to mollify it, and I can use the available space I didn't have when I needed to monitor my miscalculations. I can actually do things now that I wanted to do - should have been doing, if we want to use the s-word - back when I was trying to clean up my own messes.

It's not as awesome as it sounds; it's awkward. I have space and no instructions on what to do with it, - I should have learned the steps ages ago. I can further miscalculate, and I need to believe I'll do that because I still think I'm smart. I'm better at choosing mentors now, and I can perform longer calculations  than I could when I was young-and-dumber. I've a stronger sense of myself and I'll miscalculate in ways that I will regret less. I'm pretty excited, if excitement comes with a shake of trepidation.

I still think regrets that come from miscalculating are better than the ones that come from inaction. I understand the limitations I had when I made those messy choices, and they're stuffed in a mixed bag with good times, so... I regret not taking the internship with the jeweler in New Orleans, but  honestly I couldn't because I had babies and an uncooperative partner. I regret not taking the law internship because I chose household peace which never materialised anyway. Nah, that one's useless, too.

My biggest regret remains not seeing Avery Brooks as Othello at Shakespeare Theater in 2002.  If I could time-travel, I might risk bolloxing the continuum for that.

Regretsy
That is all. Make sure you have some time to waste.
Reactions: