We can't have nice things...

By débora Ewing 25 May 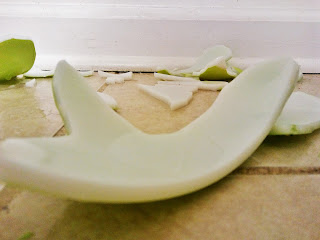 Tiny cottage is really tiny.  I can barely prep food or clean up after myself, and definitely not at the same time.  So when I knocked something off the counter, it smashed into this lime green vintage Anchor Hocking bowl which held my cat's water.  Don't judge - her food is on a china plate.

I got mad at myself for being so lazy, so wasteful, for spending so much on that bowl, chided myself for my materialistic ways.  I don't know whether my Catholic upbringing is really to blame, but admonishment is required any time something goes awry. And the cat was alarmed. Not only was this A Loud Thing, but now it was something different - broken - in the place where her water should be.

So I took a picture of  the crash, from a cat's view to be artsy and to acknowledge her chagrin, and I planned to email it to my friend Moe and say, "We can't have nice things...", but then I noticed a pink bit of fuzz in the middle of the picture.

I've spent the last week editing photos from Bino's momma's birthday party.   Before that was Charlotte's birthday party.  So maybe it was reflexive, but next thing I know I am spending five minutes retouching the pink fluff, and scuffs on the wall, and whatever whatever.  When I realised what I was doing - for an email, mind you - I laughed and kept going.  It was relaxing, somehow, the rote activity of photo-editing.

Self-soothe in whatever non-harmful way works for you.

I like pictures of decay, collision, breakdown. One of my favorites is a smattering of silverware across the walkway beside my DC apartment-house. I like to capture graffiti as a sociological study.

I am not going to replace the bowl, not while I live here. There isn't room for it - the cat can drink out of plastic. I am going to have another secret photography gig in the near future and it's gonna be awesome.