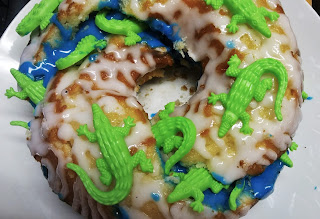 June 17 is the birthday of Maurits Cornelius Escher. You know his work; if you didn't know his name before, now you do. You're welcome.

I've told you before about my awesome book club - we're reading Gödel, Escher, Bach - An Eternal Golden Braid by Douglas R. Hofstadter for over a year now. It's a pretty dense book.

The scheduled meeting was June 16, the day before Escher's birthday, so I thought we needed a birthday cake. Möbius Cupcakes?  Möbius Chicken Strips!

And then I remembered reading how a bagel can be cut so that the two halves are linked. (You, too, can make a Mathematically Correct Breakfast.)

I hied me to the dollar store, looking for plastic ants who could march along my cake like the famous Escher etching of ants on a möbius band. No ants, but I did find alligators, which relate to a different Escher work.

I bought a bundt-style cake at the grocery and attempted to cut it möbius-style like the bagels. My plan was to cut, and then freeze, so the cake would be more sturdy to handle.

I can tell you this: a bagel is much easier to manipulate than a bundt cake.

The cake came apart with very little prompting, but still only broke in 2 places.  After some consideration, I decided that a 2nd run wouldn't come out any more neatly than the first cake so I went ahead with decoration. I used bright blue cookie icing between the layers, so the möbius band would be easy to see. The alligators were positioned between the layers, marching between and over the top of the cake.

Barney was disappointed that there wasn't an alligator snorting cotton-candy or something, like in the etching. Barney likes to be the voice of dissent, or at least he likes to try. I should have used snakes. 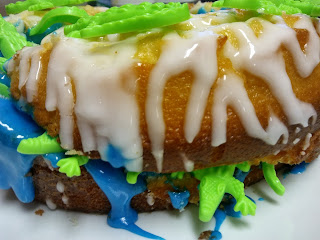