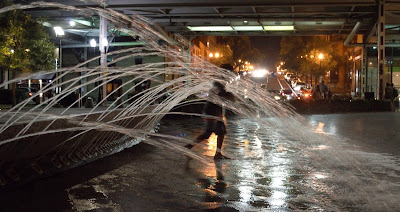 Eddie's girl had told him:

Eddie said no to the third one.

I was enlisted by my office-mom Stacy and Auntie Shantel to be the photog. For the record, I am older than both of them.

"There goes Debora. She'll do it. Debora, you got anything going on August 1st? You do now."

I've shot 2 weddings and a birthday party for coworkers. I'm the unofficial official.

Eddie wanted to pop the question at the time and place where he'd asked his girl for a date the very first time -  Waterfront Park in Georgetown, DC, at midnight.

Since I had to be in DC on a Saturday night, I went camouflaged: skeleton dress, bow tie, combat boots, blue lipstick. So maybe that isn't much of a disguise by my standards.  I parked in the garage just to be stress-free and walked toward the waterfront by way of the Ritz-Carlton's outdoor bar, The Yard.  There I had a local whisky (I love that moment when the bartender appreciates your wince at the words Jack and Daniels) and borrowed the bathroom while I was there. This segues into a completely different story for later,  The Poshest Loo in Town. I'll come back to that. What you need to know for now is that the aforementioned story is why I've got Ritz-Carlton toilet paper in my purse (which I should probably take out of there.)

On my way down the hill to the water, I witnessed some bicycle-vs-car road rage and eased over to a spot where I could take pictures if necessary.  I shouldn't have to tell you that I'm on Team Spokes.  If you didn't know, YES. The bicyclist is supposed to be in the road. Your four wheels and airbag don't make you a god, but they do give you additional responsibility. Please heed that.  My services weren't needed, though - the whole scuttle didn't go past shouting through the closed car windows.

There are two fountains at the waterfront; the one is low and designed for children to play.  At 11:00 PM, some kids were there playing soccer in it. I took pictures, texted Eddie to find out where "the spot" was, and walked toward the larger fountain outside Nick's Riverside Grill.  I could hear electric guitar down the the darkened corniche; first I walked past the busker but I turned around.

"I have to ask: not tube, right"  The kid looked at me, made a few mental leaps, and turned around his portable to show me. I couldn't remember what you call an amp that has no tubes.

"You said Tube, right? Because no, not tube, and it's a CUBE," he showed me the brand name, "and yeah, it's solid state." He looked at me to see if that was the answer I was after - it was.  That's the word: solid state. I looked at the guitar, too.

"And f-holes!  I still got it.  That's an old-ass rig if I recognise it by ear. I'm old." I stopped before using my favorite line of who told you to play out of that? There is an old and deep music culture in DC so it's safe to assume he grew up in it.

"You play?" his friend asked me.

"OH no. I'm a band widow and the basement was at our house.  I sat in the kitchen and waited for the police so I could flip the lights and end practice." They laughed. I'm edified every time I tell that story and musicians get it.

I explained why I was there with my camera, thanked Guitar Boy and Friend for the conversation,and continued down the corniche to the tune of "Can't Take My Eyes Off of You." I sang as much of it as I could remember, not even considering that I was loud and dressed funny. Probably nobody noticed.

By the time I got to the other fountain, Eddie texted that they were parking. I responded that  I was literally at the fountain.

"Head toward Key Bridge. By those black thingies."  So I headed back in the other direction, and as I approached the buskers I heard the James Bond theme song start up on a solo guitar. Like he knew knew me.

And then  I asked the friend, "You speak Guy. Can you translate for me, maybe? I'm supposed to be looking for the Black Thingies.  Do you think..."  We both looked around at the metal awning over our heads.

"I think he means this thing, yeah."  So I sat down and took pictures of Guitar Boy and Friend.

"You guys are in on it now," I told them.  I put my business card in the bucket. "Send me an email and if any of the pictures come out I'll give them to you." I hope  he reaches out, because I  like a couple of the shots.

We all three of us inspected every couple that came our way.  Finally I spotted them, and started circling with my camera.  I heard my phone ding and texted Eddie back.

"Right behind you, Donkey."

Every time his girl started looking around I would take pictures of the guitarist, the Indian families, the city of Rosslyn across the water.  Finally they looked engrossed in conversation and I'd figured out the best vantage point so I sat down on the brick paving.

Eddie got down on one knee and I started snapping.  I got up and moved to several angles;  I am not a pro, and my equipment is not pro, and it was very dark. I had no idea which pictures were going to be useful.  I heard her voice go up a little.

"Seriously? You're going to do it HERE?"

My favorite picture was too blurry to share with the happy couple:  she was crying, wiping her eyes with one hand and holding the other out so he could put the ring on her finger. The guitar player started playing "Can't Take My Eyes Off of You" again. I love collaborators. I just wish I'd remembered to have someone take my picture.  It was a great outfit.

Congrats, Eddie and Raena. It was my pleasure to be there. 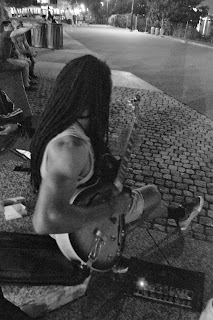 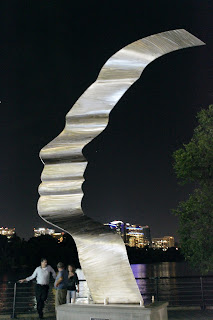