Sharp-Edged Thingies vs. It Was Never About The Donut 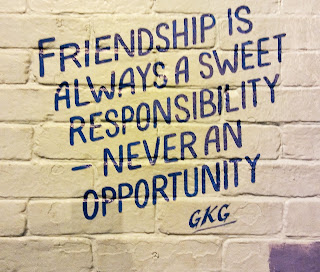 I was recently asked to follow instructions with no explanation and I did it.  If  you know me in real life, you are probably amazed.

I heeded because I trust the person who made the request (which wasn't really a request.) There were times in my life when I would have gone straight to do the thing I was explicitly asked to not do. I'm feeling pretty adulty, if confused.

The Wielder of Instructions has a history with me that's earned my trust - a series of honorable decisions made, not deference to a title nor membership in any particular club.

You need to let people know where you stand, and that can make you a potential target. Sort of a double-edged sword, isn't it?  Nobody wants to be cut.

People sometimes use templates to define their ethics and values:  clubs and churches are the easy ones to identify.  We like the idea of knowing what to expect - it's easy, maybe even a ready-made personality. When we want to parse the template, we're accused of cherry-picking the religion or forming a splinter group. Sometimes, though, no matter how a person self-identifies they are really just being asinine.

People, IT IS NEVER OKAY to follow a template without questioning it. If the tenets of your system are valid, they will withstand scrutiny. There is no way you can be only one thing. Conservative or Liberal is not the color of your uniform, and you have other beliefs which deserve your attention.

You can try on different lifestyles like outfits to see which one fits, but nobody is going to know you are a vegan unless you tell them. There is not a One-Size-Fits-All Vegan-suit, but your belief can be a broadsword if you go wielding it at people. You may end up cutting someone, or yourself, instead of getting your message across.

Don't be That Guy At the Party. You are not qualified to help other people fight their demons. If your process is helping you be a healthier version of you, people will ask how you did it and you can tell them. Respect humanity enough to let people make their own decisions and don't judge too harshly. Inform them if you can, but draw a line - for yourself, not for them.

Be like the guy who heard a dad tell his kids: "You don't need any more sweets.  Have a croissant..." and quietly handed dad a folded-up note explaining that the flour and butter in a croissant are un-useful carbs and not any healthier for the kids than a doughnut.

It was never about the doughnut, was it, Alan? It was about keeping your sharp edges to yourself unless someone needs help cutting up something. Let your honorable actions define you.