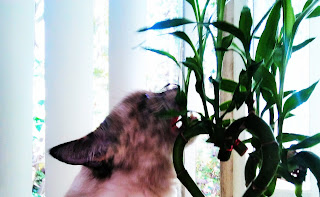 I came home from this road-trip to find my cat Noori hiding, crying, in the closet.  She was so well-entrenched that I couldn't even find her in the closet at first. Finally she came out and hid under the bed, still complaining. By morning she was walking on me and  yelling for breakfast as usual.

She went out briefly earlier to eat some trumpet vine, and then I made her come back in.  She's sitting at the front door now, telling me to open it.

I want more, she says.

"You can't go out there. You're getting too brave. I need you to not be brave," I tell her, and then immediately I re-frame those words as if she were a human-child, and I feel a tinge of something akin to regret.

"There are things out there that will EAT YOU." Again I flinch; but this time I know I'm telling the truth, not setting up unknown dangers to bind the child's spirit. "There are owls and foxes and stuff." There really are.

They won't catch me, she says. I don't care. I remember saying this to my mom, believing it. Oh, there were monsters, alright.

And she retreats to the unmade bed, sulking in a pile of comforter. If she were me as a child, she would bury herself in a book. She doesn't read; Noori uses books to sleep on, too.

Noori isn't quite my spirit-animal; more like my sister. We suffer boredom here together. We're restless in this small space. She's restricted by species, though;  when I go out for a bike ride later she can't join me, nor would she want to. She just wants to go out into the woods and play jungle for a while. Remember make-believe? Where are those days?

We still play at make-believe as adults. The rules are a little different, and sometimes we forget it's a game.

Even though I wrote the story of Iqbal the Cat I don't think cats struggle with inner growth or existentialism. I'll be travelling inwardly while she's fighting the rag rugs and hair-ties.

I've come back from my road-trip changed, bigger. Even less restricted than I was before I went. When you hug the universe you capture a bit of it, or it captures you.  Yay for strengthening bonds.

Oh, there were monsters, alright. Here I am, though; I survived them, Mom. My scars give me power now. Instead of going out, I am going in, looking for more monsters to battle. I'll come back and tell stories of what I found, maybe bring back an arm. I want more.

I have so much work to do. 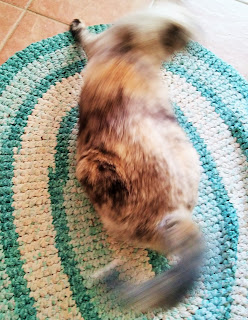