Feels in Art vs. Fractals and Reduction in the Zorya 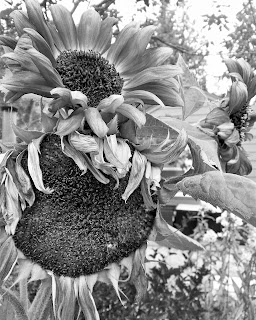 I'm about to give away secrets I don't usually discuss. This is a gift in return for your friendship - thank you.

Today's topic is mechanical but also organic. "Mechanical" implies rigidity, doesn't it? Flowers aren't rigid, and neither is paint. However, there's some formality and structure in the process of capturing the feel - fluid rigidity.

So that moment I've been waiting for has finally arrived, and visual art is erupting from my psyche. I am SO HAPPERY. I've started with the picture you see here, which was taken in Seattle on an August day. The sunflowers present to me as utter sexiness in various life stages.

That's the process I want to portray:  how reproduction is beautiful, attractive, and present in all things throughout our universe, reduced even to the cellular or paint-stroke level. I'm also going to equate sunflower seeds with Slavic mythology, and name it The Zorya.

Here's the point at which (much like when the characters take over in writing) I could feel that the characters in my painting might deviate from the initial drawing: 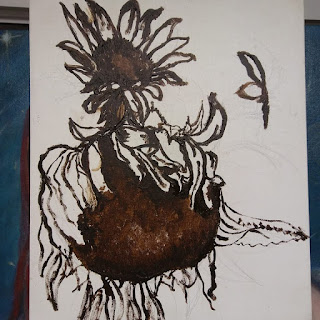 I'm keeping this picture of the sketch close at hand in case the painting wanders off in the wrong direction.

I need to mention here that while I was paint-sketching, and trying to channel the feeling of sexiness in the universe, I was watching The Code on Netflix. This is not the Australian cop show, but a BBC series in which mathematician Marcus du Sautoy explains our organic world with mathematical symbols. Each of my paintings has a song associated with it, the one I listened to repetitively while I worked so the feeling would be maintained. I haven't found the song yet for this picture, or so I thought. Apparently this painting's song is a BBC series, or maybe the voice of a mathematician.

Today I was watching Four Seasons in Havana, a really excellent series of 4 episodes (also on Netflix) that I've watched many times before. The cinematography is really fantastic, and the stories are good, too.  I realised, though, as I worked, that the third flower had a completely different feel: 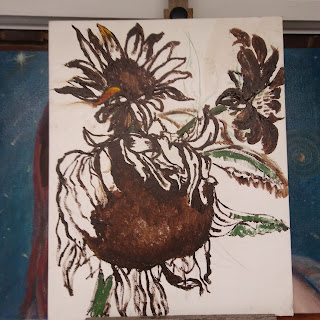 Okay, so the photo makes it look just sloppy, and that would be fair to say. Regardless, I washed it off and put on the other show again. Marcus du Sautoy is talking about geometry in geography, and how the art of Jackson Pollock is aesthetically pleasing (to some) because it employs the concept of fractals. Fractals are challenging for me to explain with my non-math brain, but essentially the idea is that things (shapes, processes, numbers) repeat themselves at increasingly smaller and deeper levels. Tree twigs follow the same progression as the trees themselves; our solar system circles the sun the way electrons circle the nucleus of an atom. du Sautoy says that you can blow up an excerpt of a Pollock painting and it will look visually the same as the entire painting.

I work with acrylic because I can more or less wash it off if I bollox up my work - it depends on the point at which I discover I've been bolloxing.  So I did that, and I blew up the picture of third flower so I could examine her more closely:


...and then proceeded to portray her coquettish petals with a feel similar to what's evoked through the other two sisters. I had to realise that each flower is, in the original photograph, at a different life-stage; the larger front-and-center Vechernayaya is wilting, though still beautiful and attractive. They won't match exactly.

Now that I've broken my own fatwa and told you what I was thinking when I conceived the piece, I may have to just undo the whole thing. In case I don't, though, now you know.

Neil Gaiman - American Gods
Props to Neil Gaiman for inventing the third Zorya, Polunochnaya, the Midnight Star. Is anyone else just dying while the second season of the TV show manifests itself?

Mari Sloan - Beaufort Falls Trilogy
Props to Mari Sloan for hanging around and asking questions, which prompted me to write this blog post.

Fractals - World of Mathematics
Learn more about Fractals from a source that is qualified to explain them to you, whereas I am not.

Marcus du Sautoy - TED Talks
I'm gonna invite this guy over for tea one day, when I have a proper kitchen. In the meantime, if he wants to pop over and have a whisky whilst I'm working, cool. Hey, @MarcusduSautoy - lemme know if you'll be in Annandale, k?
Buy the Book: What We Cannot Know: Explorations at the Edge of Knowledge - Marcus du Sautoy
Buy the Book: Symmetry: A Journey Into the Patterns of Nature

Further further reading:
Here are the links Margie posted in the comments, for your review:
Fibonacci Sequence - Geeks for Geeks
Fibonacci Spiral Examples

RedDotBlog - Watch this: Jackson Pollock
Jason Horejs and I seem to be on a theme this week. Check out the video. 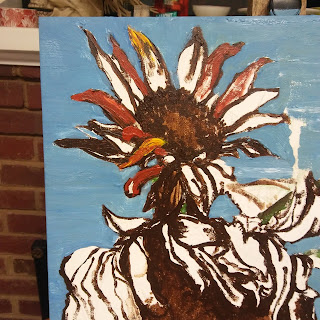