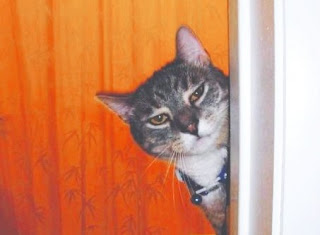 Iqbal was born into his 33rd life as a cat. This would have surprised him had he retained more memories, because his 32nd life had been spent as a Muslim who believed no such thing could occur. Iqbal the Muslim had in fact spent delightful hours over tea with a Hindu neighbor discussing the possibilities, or lack thereof, of reincarnation.

Iqbal the cat dutifully washed his paws in the drinking-bowl after visiting the litter-box.  Then, catlike, he would be distracted by the trail of water splashed out. He would follow it with his nose and return again to the bowl to splash out more water, never able to solve the mystery of gravity.

Iqbal peered out from behind the door of the barn where he spent his sleeping hours.  He took his naps in the straw-pile, which was much like the bed of straw his momma made him as a young boy growing up in the Swat Valley.  Iqbal the cat didn't so much remember his  human childhood as he felt a natural comfort in the smell of straw, in the slight crackling sound it made as it bent under his paws. Iqbal the cat, sensing no unfriendlies near, crept stealthily out of the barn and across the yard toward the house where the people lived.

Iqbal sat patiently on the doorstep, waiting to be invited inside. He never knocked, nor scratched nor cried; he simply waited. Eventually the door would open, and children would rush out, or else Iqbal would be escorted in.

Iqbal the cat curled around Aunty's leg, uttered a sweet miaou, and passed her into the house. The hens never appreciated Iqbal's appearance in their home, possibly because they sensed remnants of his 16th life as a peasant farmer who raised and killed chickens for market. Certainly their hiss of "Butcher!" when he came near was a hint.

Iqbal (or Tom, or any name you wish to call him) sat gently on the edge of the carpet, tail over toes, and waited for the aunty to come back. She would pour him a bowl of milk, which he'd taste because he had good manners but not finish because milk gave him a sour stomach.  He would then practice the catly art of Being On Top of Things. He would gauge carefully the direction and velocity of the breeze running across his hair from the living-room, and the distance and the smoothness of the intended landing surface, then leap. He delighted in the dramatic pose of his tail, which was merely performing balance functions but looked so handsome in doing so. He would watch over the house with half-closed eyes, silently missing nothing.

During these waking times, nearly always in a patch of sunlight, Iqbal would daydream. That is, were he human he would daydream. As a cat, who can know what the images meant to him as they played in the subconscious waking mind?

Little memories, triggered by things his cat-eyes saw in the living-room, would rise like bubbles and burst; visible and comprehensible only for a moment, but nice. He enjoyed them. When Aunty was washing dishes, Iqbal the cat would smell the running water, and for a moment enjoy an image of a running stream with fish inside. Just as he began to consider a line and a hook with which to catch them, the image would be gone, and Iqbal would be distracted by a speck of dust glinting in the sunlight.

These thoughts, and the constant watch of the sentinel-cat, made Iqbal sleepy. He would gently leap to the ground, and wait by the door - simply wait. When someone noticed him and opened the door, he would miaou a polite Thank You and cross the yard with care back to the barn-straw for a nap.

Iqbal's sleeping-dreams were quite different from the waking ones. Sometimes they were warm and soft, and his little cat-mouth would open slightly with the tip of his tongue slipping out. All his muscles would completely relax; in his dream he was safe, perhaps in the warm embrace of his cat-momma who nestled him between her belly and paws and nudged him with her wet nose.

Other dreams caused Iqbal to twitch in his sleep, and cry out - rather than curled sweetly he would lie stretched on his side as if frozen in the process of running for his life. He would dream of blood and horror, and thankfully being a cat would not remember any of it within seconds of waking. He would rise and shake himself, wonder for a moment at the tension in his neck and legs, and stretch into an arching yawn before sidling to the barn door.

In Iqbal's 29th life, Einstein once told him (over tea) that he believed God does not play dice. In Einstein's previous life he'd been a scientist who believed that energy never goes away; it just rearranges its atoms to become something else.

Iqbal the Scientist believed in God, and the Universe rearranged itself accordingly.