At Ian's Place - Part VII, in which There is Singing. Loudly. 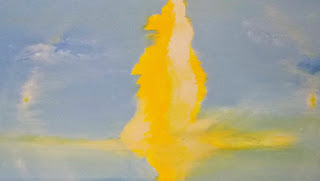 Phil seemed to be getting used to my existence; he started showing up with accordion case in hand rather than going back out to the car for it. I have to assume he stopped by occasionally when I was out, but maybe not. Maybe he really was the perfect accompanist, knowing precisely when to come in.

I got used to Phil’s existence, too; I was being more like myself, which means starting mid-discussion on random topics, assuming he’d know something about them. He didn’t talk much, sometimes punctuating my monologue with accordion riffs and then laughing at his own musical jokes. This only prompted me to come up with more random topics, like a challenge.
I was not wrong – he possessed a wide range of knowledge and could advance the discussion when he felt like it. I sometimes identified his accompaniment as a familiar bit of jazz; sometimes I really think he was playing K-Pop. If I yelled out titles, usually bluegrass, he'd know at least a recognizable bar or two.

Once in a while he’d comment on my painting, ask a question or point out something he noticed, never any “that’s nice” comments. Always a something. Refreshing.
One day, instead of digressing while I worked, I sang – the only song I’d ever written – without watching Phil to see what he’d do. I don't know what came over me, because this is one of those sing-in-the-car things that nobody but me has heard. Phil’s hands went quiet at first, and then he pressed a gentle heave into the accordion, adjusting to where he thought my groove would land me.

And then I went for full car-singing volume, pecking and swiping at my canvas with my hands instead of the brush, with feeling rather than intent. I’ll be damned if Phil didn’t make me sound like a song for two minutes – probably a minute and a half. As I wound up my performance (having lost any landmarks that looked like a musical scale) he faded out, and then just sat there with a little smile.

Honestly, I was out of breath. I laughed and shook my head.
“Wow. Dood, I never do that,” I said, with some awe and gratitude.
His smile got a little wider. “I know.” I laughed; he didn’t.
“Thanks for that. I guess I should check around for paint flings,” I joked, as he got up and put the accordion back in its case. On his way out the door he turned to me.
“One of these days we’ll write one.”
“You got jokes. Alright, yeah.” He didn’t seem to be joking.

All paint flings had landed safely on the canvas.