At Ian's Place - Part VI: in which It (sometimes) Rains in Southern California (appreciation for the Wrecking Crew) 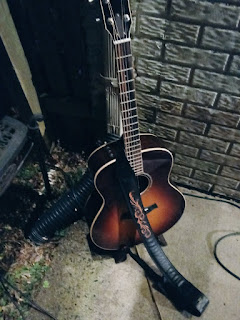 Everyone in Lo-Cal waits all year for the one week of rain. It usually tapers into a drizzle by afternoon but every morning is a torrential downpour, like when I jumped out of the airport shuttle with my bag at 10:50 AM. I was drenched immediately - no reason to run, then. I strolled to the patio, relishing the magic. Living in the desert taught me how precious rain is, and I’ve never forgotten. As I turned the key, I looked around me. I could see the next door neighbors standing on their small patio, beatific, holding their tiny twin babies up to see it rain.

Upon entering, I found Ian’s acoustic guitar in the living room, smashed to freaking bits. Splintered, in a pile just outside the hallway. Like someone had jumped up and down on it. That beautiful Seagull Phil never touches.
I couldn’t figure out what could have happened to the guitar unless Ian did it himself. And I couldn’t figure out what would cause him to do it. The Seagull was a high-end instrument kept in a room nobody used, like a relic. I sat down on the coffee table and thought hard about all the things I knew about Ian, and all the things I didn't know.

For the first time, I considered my own safety. Did he have anger management issues? Alcoholic? There was a bottle of mezcal in the cabinet, unopened; if I ever had alcohol, I bought my own and didn’t leave leftovers. Was he Bipolar or Schizophrenic? Scientologist? Anything was possible.

My brain started scriptwriting: he kept that bottle as a challenge or a reminder, and a 20-year chip in his pocket. The mezcal was a gift. He travels so much that he hasn’t been to a doctor in years and needs his meds adjusted. It had never occurred to me to go through his medicine cabinet – should I?

Maybe he just blew up.

Suddenly I remembered the two burns in the loveseat. What if someone had gotten into the house again and smashed the guitar? Only an angry lover…but what forceful damage. It was a very strong lover. His crazy ex is a carnie, I thought, the Strong Moustached Woman, only in town once a year. Truth told, I wasn’t even sure he was heterosexual.

What if this was a murder scene, and the Seagull a weapon? I looked for signs of blood and accounted for all the strings. What about la Prima, Claudia? Was she angry enough to destroy something representing his career, a portal to evil? What if she’s had keys all along, and was just knocking politely that day? She had a hell of a polite knock.

Possibilities floored me as much as the simple truth of a smashed guitar. I needed to make contact with Ian and find out if he knew, if there was something I needed to know. I first checked for signs of break-in and found
none. I called Ian; he actually picked up.
“Hey, Libby…” I could hear sounds of stretching, of waking. “Yeah, the guitar, sorry. Don’t clean that up.” He yawned, maybe sighed. I stuck with my script.


“Is there something I need to know?” I tried to not sound maternal or fussy; I just wanted the facts. “I just want the facts. Pertinent, that’s all.”


“Yeah, no, nothing you need to know. I’ll take care of it when I get back. How’s everything? You good?”


Other than thirty-five scenarios and as many inappropriate questions, starting with WHO ARE YOU – “I’m fine. I just got in. You know, yeah. I could clean it up, put it in a box or something…” It wouldn’t be repaired; this much I knew. The neck was cracked and bent. The body was crumpled. I’d have to make efforts to step around it. It was kind of in the middle of everything.


“Alright, yeah. I’m only here for a few days this week. I have a thing in Delaware.”


“Cool. Hey, I’m gonna let you go. Good luck with your thing.” He yawned again.
“Thanks, Ian. Goodnight or whatever.” I heard a click.


So, that was it. I would have to sit all weekend with a broken guitar and wonder what it did so wrong to be so beaten down. I thought about keeping a piece of it, a fret, just to see if the absent shard of obliteration would be noticed.


The Seagull was gone next time I came out to LA.
to be continued...
Reactions: