Breakfast With Parmenides - Who Reads This Stuff Anymore?

"Meet it is that thou shouldst learn all things; as well the unshaken heart of well-rounded truth as the opinions of mortals, in which is no true belief at all." - Parmenides

I really love waking up to stuff like this in emails.  The Venn diagram of my social circles would look like a bubble bath, but if you consider the whole bathtub you'll see I collect diverse and well-read people. Together our book collections could rebuild Alexandria.

A young girl who called herself Stencil Fox suggested I read The Ground Beneath Her Feet by Salman Rushdie.  I was amazed.  How could Salman Rushdie be world-famous?  Could it really be that other people in the world, enough other people, like the same things I like?  Do readers not only follow complex sentences but relish them?  Sure, there was that fatwa-thing...and the hot wife with the cooking show.  But really, are there enough lovers of words to redeem humanity from my judg(e)ment?

I braved the masses at the 2016 National Book Festival just to find out.  The line to have Salman Rushdie sign your book was so long they broke it into three sections monitored to prevent line-jumping.  I waited it out, I looked him in the eye, and though he was exhausted, he saw me.  You know when it happens.  He saw every one of us, I have no doubt, and that teaches me something I have yet to completely digest.  I made intimate friendships during those hours we stood, sat, lay in the line together; we all sailed off without another thought toward meeting again.

I also met Joy Harjo, whom I'd met before, and who still teaches me with every word she prints.  I spoke with A.B. Spellman about his poetry, and how his writing confirmed I'd been able to see a little of his city, just a little, while I lived in it.

I haven't yet found a friend who shares my love of Stalinist-era Russian Literature, but I did make a hotel reservation for a relative of Anna Akhmatova.  I heard the name and I had to ask.

"Like the poet?"  I will cherish forever that ten-minute discussion; the guest on the phone had actually seen a poem written by Akhmatova's own hand.  She was inspired, she told me, to ask her grandfather whether that piece of paper was still around.  She was glad to hear the name remembered.  Also thanks to the hotel business, I  met the brother-in-law of my favorite Russian Translator.  These are my celebrity fangirl stories.

One time my parents came to visit me at the house in Michigan where I lived with Tim. He excused himself and came back to the dining room with Fatal Half Measures by Yevgeny Yevtuschenko, translated by Antonina Bouis, my favourite.

"Why?" Tim asked my mom. "What did you do to make her like this?"  We laughed, but I felt so understood. 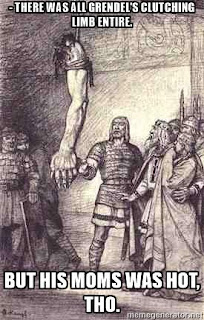 It's the really old stuff I find irresistible:  Canterbury Tales, The Faerie Queene, all the way back to the Oresteia.

I gave Abbey's momma a tote bag and a copy of Beowulf for her birthday.  I try to read every translation of that sausage-fest I can find.  I had no idea whether she would like the book, but she did.  Another friend at the party said she loved that story, too.  A bunch of Beowulf fangirls - I could have died of joy in that instant.

I am not alone with my books and 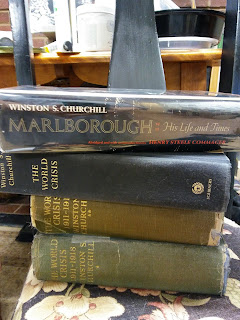 my poetry.  Separate, but not alone. At the moment, I'm awaiting two boxes of Winston Churchill's abridged writings, sent me by someone who caved and bought the full sets.  One day, I'll do the same and pass on this collection to another bibliophile.

I am seriously considering having a funeral before I die. I want all my diverse friends to meet each other, digress, and celebrate words. Oh, the fun we'll have crashing our brain cells together.

If you're crazy about stuff you think nobody else likes, you're invited.
Reactions: