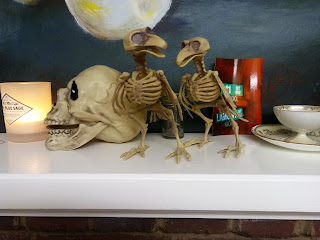 Conceptual Skeleton is my new favorite thing, because it forces a match between two of my pre-existing favorite things, concepts and skeletons. This week's GEB book club reading - we're working through Chapter XIX - was really all about me and my methods in writing, especially poetry. I figured it out thanks to Sherlock.

I see a pattern between disparate words or processes and I squeeze until I can draw a metaphor over them, forcing a match. The metaphor drawn and applied is a conceptual skeleton. Skeletons work nicely because the variety of bones and joints makes the concept flexible enough to drape over something unlikely, and then it can be pushed around until it seems to fit.

I am not ashamed to admit I don't know how many times I've watched all episodes of Sherlock. While I was reading GEB, Season 3 Episode 1 was playing on the TV and something gelled. If this is about to be a spoiler, shame on you. You should have already seen this show.

I think it's the 3rd scene that begins with a man being chased through deep woods; he's detained by Eastern European thug-types and tortured. We are able to discern fairly quickly that the detainee is Sherlock, because 1. it's his show, and 2. he's whispering insights to the interrogator, who leaves the room.

The observer in the corner (is this the witness in the Turing test, or the interrogator? I forget) then speaks to the detainee, and we realise it's Mycroft, because he leans in and whispers to Sherlock that there's a terror situation in London. We know M likes to keep S on a leash for such high-level events.

And then he stands, gets a clear camera shot, and announces:

"Time to go back to Baker Street, Sherlock Holmes."

We can assume that some members of the audience hadn't tumbled onto the dynamics of the scene until Mycroft spelled it out for them. I'm sure there's a name for this writing device, but I don't know it. Often that reiteration-reveal is annoying to me, but I find it nicely done in this instance. Thank you, Mark Gatiss and Steven Moffat.

Like I said, at the same time I was noticing the Reiterated Reveal (or maybe congeal), I was reading about conceptual skeletons and how they apply to metaphor. I wrote the following in my GEB book:


The way it's supposed to work is this: when you find the forced match or complex isomorphism, you're supposed to leave a piece of your brain with that while another piece goes off looking for context and maybe another is following the storyline. Further down the trail you'll find (if the writer has done the job correctly) a piece of the puzzle; if you've sorted the isomorphism already, then you're edified. If you hadn't figured it out yet, you get closure and maybe even an "Aha!" This margin is not big enough...

In literal terms, here is the effect in process:  you, the reader, come across two words that don't usually go together (conceptual and skeleton) and they may or may not form immediately a picture in your mind. Hold that thought, and continue to read, please.

Further down the page, you will realise that the word "skeleton" has multiple uses, and the author is having a joke by using one of the more obscure meanings, or possibly more than one meaning concurrently. The context of the paragraph has likely clued you in; the author may have wrapped up the paragraph which a clear explanation of how concept and skeleton relate to what is being conveyed. Ay, there's the rub.

If you are one of the people who caught the first time that "conceptual" and "skeleton" are working together as a team here, you may feel that the wrap-up sentence treads into the territory of over-explaining. It occurred to me, though, that I shouldn't be so arrogant as to assume my cleverly-joined wordplay (or forced matches) are obvious enough for everyone to understand the first go-round. Reiterated Reveal is a tool I need to use effectively. To be honest, some of my forces don't match all that well. Those should be scrapped instead of over-explained.

In the realm of science, we need to be careful of Forced Matching. It's good for developing conceptual skeletons, but ultimately your pet theory is going to have to be qualified with evidence.

Here is the lesson for writers, writers: make your reiterated reveal tidy enough that it fits naturally into the narrative. Mark Gatiss has proven it can be done.