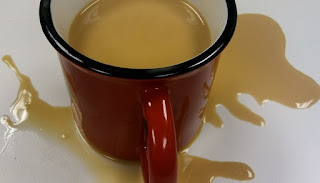 Sasha is furiously washing the dishes in the kitchen sink. The sun is rising, and Jacob is sitting quietly at the computer with his game. She's furious because he's been there since midnight, when Sasha went to bed, watched an episode and a half of House, hoping for company, eventually falling asleep; still there when she awoke unsettled because there was no-one beside her. Because Sasha thought she'd have a glass of warm milk and go back to bed, but found all the dishes still dirty in the sink like they were two days ago when she challenged Jacob to wash them. He would, he'd said, after his game.

In fact, there wasn't a clean cup for the milk. And here is Sasha, hands in the sink, washing.

"Why do I even believe you?" she mutters as she furiously scrubs.

"Huh?" Jacob more grunts than questions, and his back is still toward the kitchen. Were there any other living thing in the room, the grunt would not have been credited to Jacob, because he is traditionally static. Completely still. Sedimentary, even, sinking to the bottom.  The computer cheers.

"N O T H I N G." Sasha's hands scrub with a cadence to match her tongue, perhaps overly harsh. Her finger grazes a knife-blade submerged in the dishwater; she sucks in air and puts the finger to her mouth. "Not a single fucking thing," she whispers under her breath.

Sasha stacks the dishes carefully in the drainer next to the sink, turning to see whether the game is finished - sometimes there is actually an ending in computer games.  The credits roll; she turns off the water and watches the suds gurgle down the drain. The drain smells bad; she reaches under the sink to get the bleach but changes her mind.

"Jacob Daniel Marley, please turn that thing off and go to bed." Her words march like stiletto heels on cobblestone streets between tall, narrow buildings. The organic mass that is Jacob D. M. shifts slightly onto one elbow, still facing the computer screen with game credits rolling. The speakers blurt cacophony at the early morning.

"We have a vacation coming up." You remember the vacation, right? "You can't expect to do everything we have planned when you've been keeping this crazy schedule all week." You have done absolutely nothing but play that game. You haven't even bothered to clean up after yourself. That's why I'm doing the fricking dishes instead of sleeping right now. I can't stand to look at them any more. "There's so much stuff to do to get ready, and..." and if you make me do it all myself I'll call off the trip and be bitchy all week, and my mother will never forgive you. If it was your mother we wouldn't even be having this conversation. Don't get me started on your mother.

There is a discernible empty space between them where a loud sigh should be. Sasha has held it back, and is grasping in her mind at the straws: which one of them should be The Adult Thing to say? She isn't his mother, after all. God bless his mother, or curse her; Sasha can't decide which.

She crosses the room, picks up the crumpled napkins beside Jacob's elbow, and takes them to the kitchen to be binned.

"Okay..." Jacob shuts off the computer with an actual sigh, and goes to the bathroom. Sasha notices she's biting her lip. Would it have been better, would she be better now, if she'd gone ahead and said all those things? Would he have lashed out? Had a reaction?

If there were this kind of face-off in Babel...well, it would explain why the tower never got built. Someone says, and someone doesn't get it, and everyone resorts to brick-throwing. Maybe this is the punishment for trying to build the Tower in the first place: God placed lack of understanding between men so they couldn't conspire to be greater than they were actually capable of being - an attempt to save them from themselves. And God cursed Eve by allowing her to keep the Knowledge of Good and Evil which she wrested from the forbidden fruit; he allowed her to keep it and made her unable to convey it. Eve's curse is to know and yet appear feeble. Her words are jumbled hopelessly as they leave her lips, and Adam stares at her, just wanting a clear, simple message.

"Okay."  Jacob's voice comes from the rear of the apartment.

There is no way in hell you're getting any after ignoring me all day. I tell you all the time I can't just turn it on and off like that. I need some attention. Best to keep it simple, Sasha reminds herself.

"I'm just getting some milk," she calls back to him. She pulls a warm mug from the dish drainer, fills it halfway with milk and adds a half-packet of stevia; she heats it for half a minute in the microwave. She sits at the desk while she drinks from the mug, staring at the computer which is still turned off. What language does the computer speak that holds my husband's attention? What can it say that he understands?

Sasha puts the milky mug in the sink and goes to bed.