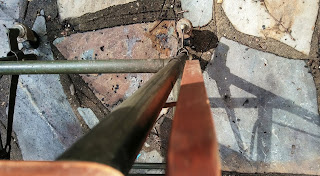 My craving for wood furniture colluded with my need to optimize minimal space in my Tiny Cottage, and I found this table on craigslist.  It looked steampunky-gorgeous, and the seller thought it would clean up nice.

He told me I'd hit one out of the ball park.He'd dug around on the internet for some history on this piece, maybe underbid himself a bit. 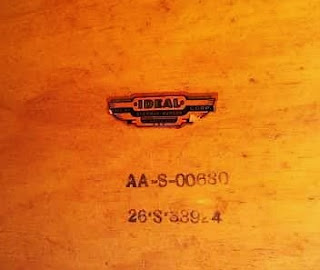 IDEAL was a popular typewriter company. Sherman and Manson were both bicycle manufacturers. BICYCLES. If you've known me for a long time, you know I'm crazy about bicycles as an art form, just as much as I love chairs.  What are bicycles but chairs on wheels, right?

In high school I rode 25+ miles a day regularly, and did all my own maintenance on my Schwinn.  When I lived in California, I bought my Motobecane at a church sale; an old French guy actually stopped me on the street to look it over.  At the moment I'm a terrible bike-mom to a Bianchi.  I had to let someone else change a tire because I couldn't get it right.  I'm still not healthy enough to bike the way I like.  But I'm here to tell you about the table.

The New York Times reported, on September 9, 1902, a giant merger between Sherman Cycle Company and Manson Cycle Company, both of Chicago, with the Great Western Cycle Company.  Times said that operations would relocate to LaPorte, Indiana, where Great Western operated.  It's speculated that the company moved to making furniture during the war to make use of all these metal tubes. 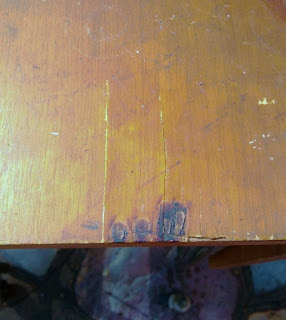 The seller remembered the table from his childhood, in his dad's basement; he'd figured it was from the '60s.  Dad smoked; tell-tale burns indicate that Dad was right-handed and a man of habits.  Dad worked on greasy things, things with a circular, donut-like base; I'm guessing motor parts.

There's something stuck to one side, possibly remnants of a lollipop stick - a square outline touches one end of it.  One of the extensions may have been holding a book where water leaked and pooled, damaging the exposed wood and leaving it prone to mildew.  The veneer is coming up on one edge, but I'll glue it back down.

There is no way I'm sanding this table.  It's magic. I stuck a couple lines about it in one of my poems.

I will clean up the mechanisms with WD-40 so they work smoothly.  I talk to it when I walk past: "You're so PRETTY, BABY." I think it just told me to call it Wayne. 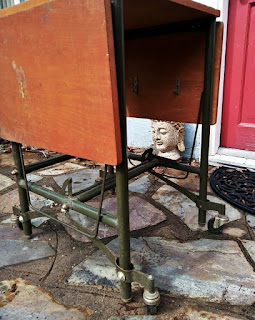